Since we hadn’t unpacked anything other than clearing off the bed to sleep, I was going to have to wait for my coffee this morning. We were up, washed, dressed and walking over to Timmy’s for coffee and breakfast by 8:00. Right next door to Tim Horton’s was another coffee place called Richards Coffee that we thought we would try instead. It was really identical to Tim Horton’s...very odd. Anyway, we had our breakfast bagels and coffee and then I headed over to Sobey’s to pick up a few groceries while Steve went to Home Depot to see if he could find a wing nut for the Satellite arm...he would drive over and meet me when he was finished.

We were back on the road just after 9:30 this morning heading to an RV park just outside of Orangeville to meet Garth and Donna. It was just after 11:30 as we were approaching the park when it started to just pour out....great! We ended up going to the wrong entrance to the park so after a phone call to Garth, he came and met us in his truck and he led the way to our spot. It was still pouring out and we were just soaked as we took refuge in their 5th wheel....we would set up later. After hellos and hugs, Garth suggest we all go into town for lunch—not much else to do on a day like today. But before leaving, we sat down for a quick visit and were distracted many times by the rain coming down...it was absolutely just teeming out!!!

We were just going to pop next door into our 5th wheel and turn the fridge on before we headed into town. But as Steve opened the door to leave Garth and Donna`s trailer, he was greeted by a huge puddle...we were surrounded by water! Garth went out in his sandals to grab his boots from the storage but next thing we knew, he was in his truck...he had decided to drive around and back in to the trailer door! So with tailgate down, Steve and I stepped from the door of his trailer onto his tailgate and he drove us through the pooling water to the road. Too funny!! I just wish I had had my camera with me!!

We drove into Orangeville and had a great lunch at Montana`s and after a few more stops...LCBO and Sobey`s (Donna needed to pick up some groceries—they had invited us for dinner that night) we were back home just after 4:00. The rain had tapered off by this time and the pools of water had dissipated so that we were able to get into the 5th wheel. It was time to get set up. 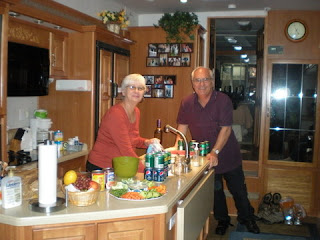 About an hour later we were back in Donna and Garth`s 5th wheel enjoying a drink with them as Donna prepared dinner. We had such a lovely evening getting caught up with them. We both shared our adventures since we last saw each other. They had left Oceanside RV Park in Saanichton at the beginning of June, so they had been on the road for 4 months. 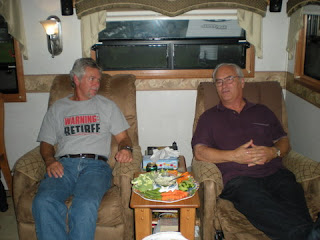 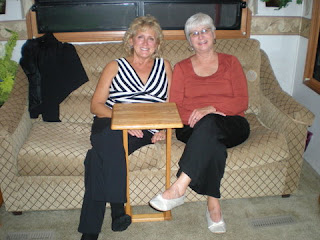 We said our goodnights around 9:30 and headed home. We were looking forward to more visiting with Garth & Donna tomorrow. They were going to show us around the area.
Posted by Dianne and Steve