It was late in the morning by the time we headed out to explore the area...we wanted to take a look around and get the “lay of the land”. We checked out the boat launch area on Elliot Lake and then drove up to the Fire Tower lookout. Fabulous views.... 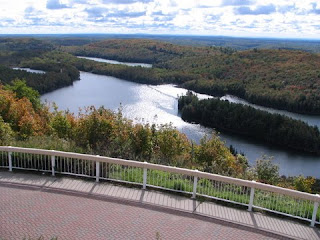 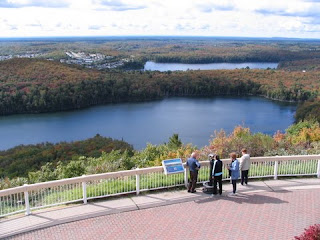 There is a mining museum at the Visitor’s Centre so we thought we would stop by there and check it out...unfortunately, it was closed on Sundays. Oh well...perhaps another time. We wanted to get some firewood to have a campfire and were directed by the girl at the Visitor`s Centre to a place down the road called The Trading Post. They didn`t sell firewood but it was a very interesting store...jammed full of clothing (for the hunting season) and fishing gear...and just a whole bunch of stuff. After getting directions to a place where we could possibly find some firewood for sale, we left and did a bit of a tour around the downtown area. Then we headed down the highway to find this firewood place...we obviously missed it because we were a ways out of town but we did see Dunlop Lake before turning around and heading back.
We finally found the place for firewood but there was no one around...great... After calling a phone number and not getting an answer and walking around trying to find someone, we decided we might as well leave. Just as we fired up the truck to leave, a truck pulled in...the owner...whew...good timing. So we paid him $10 for a pre-measured `square` of chopped firewood but as Steve started to load it into the truck, he realized the length of each piece was about 6’’...what`s up with that? He put it back and after expressing his displeasure (politely) to the owner, the fellow took him to another pile that was more appropriate for a campfire. We ended up with 2 wheelbarrows full of firewood...that was a better deal!

Once back home, we pondered what to do...it was really windy out again (story of our lives!) and I really wanted to get the blog updated as well as some emails answered. So I went inside to work on that while Steve chopped and stacked the firewood. 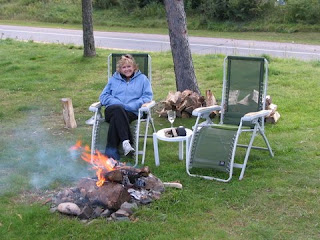 It was 4:00 when Steve said he was going to light the campfire...so I finished up the email I was working on and joined him outside. It was still really windy out so it was nice having the fire going. We waved at numerous ATV`s that drove through the campground as we sat enjoying our bevies by the fire. 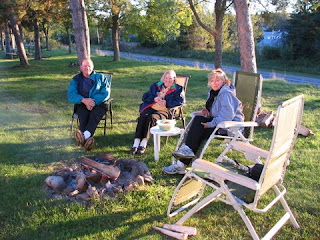 It was around 6:00 p.m. when our neighbours returned from their day of golfing. After standing and chatting with them for a few minutes, we invited them to join us by the fire. Dave and Carol were originally from Elliot Lake and return every year for the annual golf tournament. A very interesting couple, they have had quite the life...Dave worked in one of the many uranium mines in the area; then became a cop here until a back injury forced him off the police force; then went back to mining; then farmed for 4 years; and now in their retirement, they own 6 out of the 10 Tim Horton`s in North Bay, Ontario. Carol was a realtor.

We thought they would join us for a drink before dinner...but it was another...and another...and next thing we knew it was after 10:00. We said our goodnights and headed inside where we had soup and sandwiches for dinner. After having a chat with the kids, we headed to bed...tomorrow we were going riding!
Posted by Dianne and Steve