We were on the road this morning just after 11:00...and...guess what...it was raining! So much for the 2 hours Steve spent yesterday afternoon washing the truck! Rain wasn’t in the forecast...so I guess it is Steve’s fault...he shouldn’t have washed the truck! LOL!
The rain didn’t really last long as we continued east but it was still cloudy and gloomy out...oh, how I long for blue sky and sunshine! As we approached Sudbury, we turned onto highway 69 heading south. There had been some major highway construction recently with some overpasses put in and poor Serena (GPS) figured we had gone astray a couple of times and were driving where there were no roads....”recalculating...recalculating``...too funny!
We stopped at a Shell station just outside of Parry Sound and fuelled up (diesel was 98.9) then continued to the Walmart parking lot where we thought we would spend the night. Another glitch with Serena...she had us turn left into the Canadian Tire parking lot...when it should have been right to Walmart...poor girl must be tired! As we entered the Walmart parking lot, there was a big level gravel lot where truckers park and at the edge of it, a fellow had a small RV sales and service business set up. So rather than the Walmart parking lot, we thought we would see if it would be okay if we cozied up beside the used RV`s. The fellow (Mark) who ran the small business had no problem with it, so we backed in. We were perfectly level...bonus! We pulled out our chairs and sat outside with a drink chatting to Mark, learning all about the area. Too bad we don`t have more time to explore the area...perhaps another time. 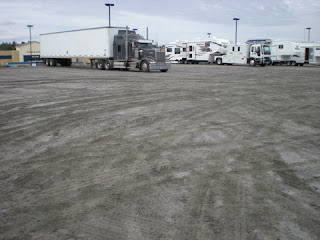 Our fridge started chirping indicating that we had just run out of propane. We had been trying to find a place to refill on our way down but hadn’t any luck. Mark said I don’t normally do this but you can use my truck. We didn’t even know his name at this point! You meet the greatest people as an RVer.
The area was absolutely littered with fast-food places...the best we could do for an actual restaurant was a Pizza Hut, which actually worked out well because we had one final gift card left and it was for Pizza Hut, KFC or Taco Bell...we`ll take Pizza Hut! We had a good dinner with one annoyance...tiny flies that kept buzzing around us. The waitress said that it was the beer we were drinking that was attracting them....hmmmm....I think they just have a problem there.

After dinner we wandered over and checked out Walmart and the Dollarama store (big night for the Baba’s!!) and then headed back to the trailer. We thought we would lie in bed and watch a movie...another one of the many that Dennis had loaded onto our memory stick. We were about half an hour into the movie when we heard a knock at the door. Steve got up and slid open the side window overlooking the doorway. A young fellow introduced himself as being from Parry Sound RV and said that our interior light in our truck was on. We had purchased floor mats at Walmart and forgot to turn the light off as we haven’t had it on all summer. That most likely saved us from a dead battery in the morning!
Posted by Dianne and Steve