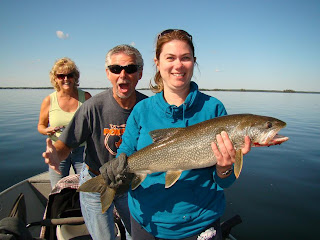 We were up and out on the water by 8:30 this morning. It was an absolutely perfect morning...not a cloud in the sky...but a bit cool, so we were bundled up as skimmed across the water to the fishing spot. Steve landed the first fish of the morning just before 9:00. All together we brought in 9 or 10 good size Lake Trout but we released them all. What a gorgeous morning...at one point, the water calmed right down and with the sun blazing down, it got quite warm...time to peel off some of the layers! 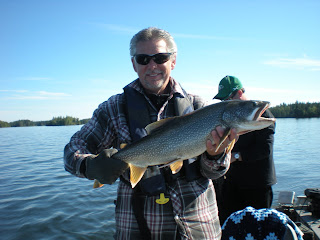 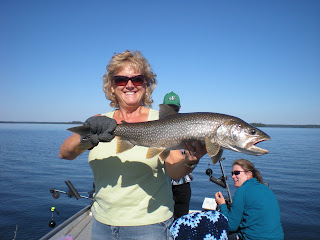 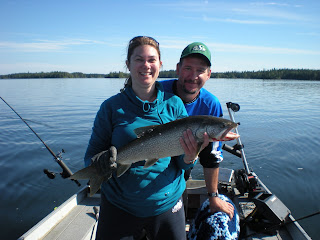 We headed back in at about 11:30 and after a quick sandwich, started to prepare the inside for travel. Dave, Kerry and the boys were also packing up but were going to go out for another fish before heading home...it was a 2 ½ hour drive back to Thompson.

After big hugs, we pulled out at 1:45. We had had a great visit with Dave and it had been a pleasure meeting Kerry and her friend Janet and son, Calum. It was also great seeing Jon...the boy of few words and his friend, Justin. Poor Jon...I believe Auntie Dianne gave him a bad time the other night as she was drinking Long Island Iced Teas! 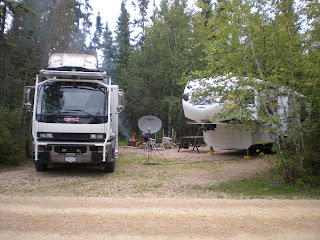 We pulled into Camper’s Cove Campground in the Clearwater Lake Provincial Park at about 3:15 p.m. and after visiting the sani-dump and filling up with water, we selected site #7 on the West Bay loop. They have electrical hook-up here which is nice and at $18.60 per night, it’s not bad. We got all set up and with good exposure to the southern sky, Steve decided to set up the satellite dish. It didn’t take long to pick up a signal but as he was about to secure it, he realized his chain was not long enough to lock it up...oh sheesh! So he moved it back to a spot that would work, we managed to locate the signal again and he got it all secure. While he was doing all that, I was inside making a batch of spaghetti sauce. We`ll have some for dinner tonight, then the rest will go into the freezer for another time...I like doing that because I can also make chilli out of it as well.

After dinner and dishes, we decided to stay in and watch TV for the rest of the evening...after all, it has been over a week! We needed a change from sitting outside by the campfire...LOL!
Posted by Dianne and Steve