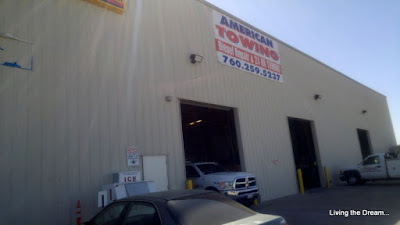 We were up and on our way to American Towing by 7:30 Monday morning. After a bit of a wait while they got their morning organized, David went for a test drive with Steve. It wasn't long before they were back and Steve was backing it into a service bay.

I sat in the waiting room chatting with a couple who had had their motorhome towed in last Friday night. As a matter of fact, they were on their way home to the Seattle area after spending their winter in Quartzsite working at one of the RV parks. Steve joined us and was just about to have a cup of coffee when David came in to get him.

A few minutes later he was back to get our phone...he needed to call our dealer Dave at Gold Key Isuzu in Langley. The mechanic found the EGR cooler to exhaust manifold gasket blown again plus while disconnecting the hoses to the turbo found oil in the system. Apparently some oil is normal however he said that it looks like a seal in the turbo is shot and that the oil has gone through the system causing problems further on down the line which in turn blows that gasket. (That's kind of dumbing it down as Steve can't remember all the component parts as described to him) He said that we were lucky because the engine could have run wild with no way of shutting it off and it would blow. Yikes... we sit on top of that engine! Steve finally felt like he was talking to someone that knew what he was doing.

Our extended warranty ran out in 2015 and this all started in 2013 and has never been resolved so Isuzu had covered an EGR cooler, gaskets and an exhaust manifold since then and that didn't work out, and Gold Key has been covering other attempts to fix this. So Steve wanted the mechanic David talk to Dave at Gold Key about his findings. The outcome was that Gold Key was doubtful that Isuzu would "play ball" anymore...and they definitely wouldn't unless we have it repaired by a qualified Isuzu dealer. American Towing is not an Isuzu dealer. Geez! That meant we had to have it towed to the nearest dealer...Rush Truck Centers in Fontana, CA, 80 miles away. We checked the reviews on this Rush Truck Center location and it was only 2.9 out of 5...great!

And the fun began...contacting our roadside assistance company, Coach-net. To start with, it made sense to us that since we were at a towing company, that this company would tow us...they would also waive their fees for the hour they had worked on it this morning if they were given the tow job.

Coach-net "did their thing" and we were told that it would be 3 hours before American Towing could tow us to Fontana. That seemed odd as there were big trucks sitting there but apparently no drivers were available. Okay...the wait began. In the meantime, I called Enterprise car rental and reserved a car...they were waiting for cars to be returned so it would be about an hour or so before they would pick us up.

Then we received another phone call from Coach-net...they had awarded the tow to another company. What?! Apparently this other company, Fast Trac, was cheaper. Steve told the Coach-Net rep again that it had to be a heavy hauler. American Towing said they are the only company in the area with trucks big enough for Buster...but our hands were tied. Lets see what shows up.

While we waited, we finally got a phone call back from Enterprise and a driver came to pick us up...we were given a Hyundai Elantra. Then we returned to American Towing to continue our wait.

Sure enough, the truck that showed up from Fast Trac was too small and this is the second time Coach-Net has done this to us. Steve told the driver that if he tried towing us the weight of our truck would probably lift the front end of his truck off the road once we started bouncing down the highway and he'd have no control. He agreed and got his boss on the phone and passed it to Steve. He told Steve that if his truck could lift it, it could tow it. Really?! Well the lower boom on the tow truck couldn't even reach our front axle to hook up so the driver got his boss on the phone again. He told Steve that he had a friend with a bigger truck.

Because American Towing lost the tow we now had to pay for the one hour of labour. A while later the owner of Fast Trac Towing walked in and asked the American Towing dispatcher how much they quoted. She told him $680. He told her he didn't have a truck big enough so they could do the tow and bill him. Okay then American Towing...now that you got the job we want our $112 back for the labour charge. They didn't want to do that because they weren't the primary on this anymore so Steve said he would call Coach-Net back and start the process all over again to make them the primary. Eventually we got our credit. Once all that was worked out, American Towing would take the truck to Fontana...but it would be about an hour or so before a driver was available. Rush Truck Center is 80 miles away and closes at 5:00...are we going to get there in time?

Well, we did...but it was cutting it close. Shortly after 2:00 Elmer arrived to say he would be taking the truck to Fontana...and he began the process of getting the flat-bed out and into position to winch our truck onto it. 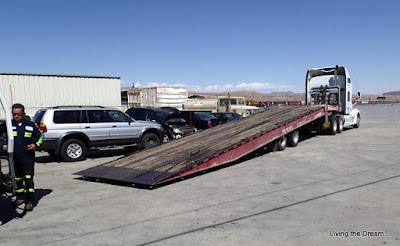 The trailer wheels move from the back to the front to lower the trailer... 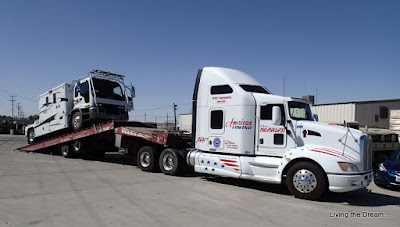 Then back again to level off... 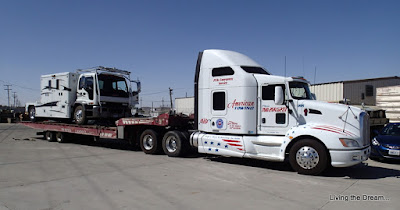 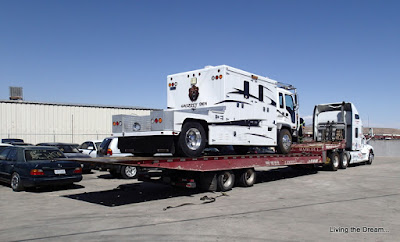 And we were on our way. It was really windy out...making it so dusty that you could barely see the mountains in the distance... 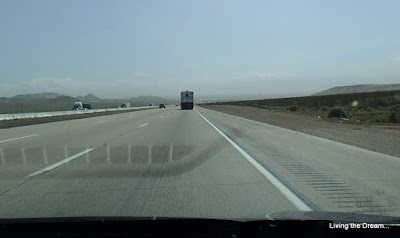 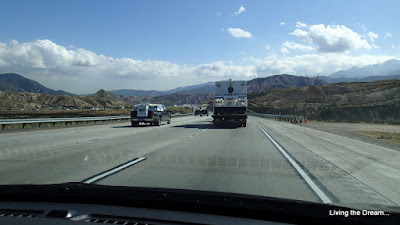 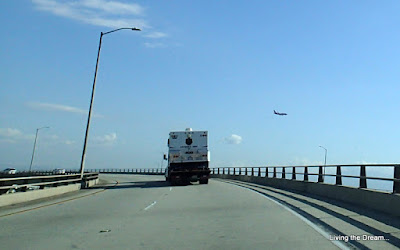 And we made it to Rush Truck Center... 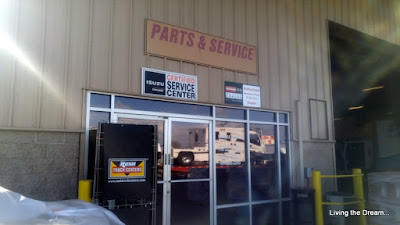 Elmer started off-loading Buster while Steve got the paperwork done with the service adviser who assured us they didn't have much on the go the following day and she would call by noon. The shop foreman, Derek, was there as well...so Steve was able to give the full 4 year history of the on-going truck issue to him as well as show him how to deal with the boat loader. 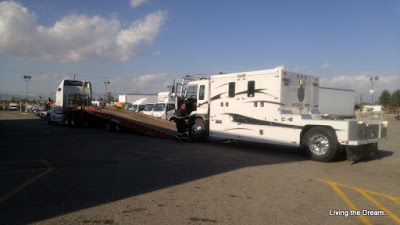 It was shortly after 5:00 when we left Rush Truck Center...I was in the driver's seat for the 80 mile return trip back to Barstow.

On the way down, we had noticed an Outback Steakhouse in Victorville. We have always wanted to try an Outback Steakhouse,...and having not eaten anything other than a granola bar since a quick breakfast early this morning, we were starving. So we stopped for dinner...and it did not disappoint. 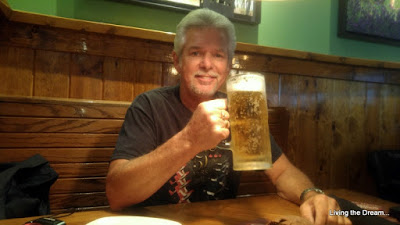 We both had a steak and prawns combo (Steve had grilled prawns and I had coconut crusted)...and Steve enjoyed a beer. Although the steak was just a small 6 oz one, it was excellent and we were stuffed by the time we ate the Caesar salad, bread and baked potato. 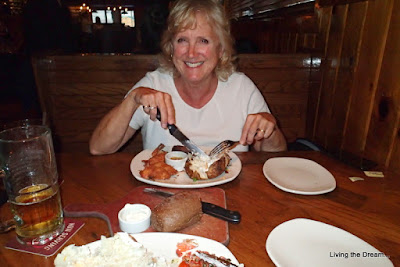 It was six minutes before 8:00 when we walked into the trailer...what a day...12 hours! We were exhausted...collapsing in front of the TV for an hour or so before heading to bed.

Tuesday was basically a "do nothing" day as we waited for a phone call from Rush Truck Center. I managed to get out in the rental car for a couple of hours and find a Walmart and a Von's grocery store...with Google maps giving me directions.

I am now going to pass this over to Steve to vent....

Well the expected noon phone call from Rush Trucks never happened so I called at 12:30 only to be put on hold forever. She eventually came back on and said they were just getting to it and discovered a blown gasket and missing and loose bolts and were trying to locate the parts. What...you were told this yesterday!!! What about the oil in the turbo? She said to give her a couple of hours and she would update me. Well that never happened so at 2:30 I called and the phone rang forever. After trying several times somebody finally answered and once again I was put on hold forever and the call got dropped. GEEZ! After a couple more attempts, I finally got through again and she said that she would call us back in a few minutes after checking with the parts dept. After waiting for 2 hours, at 4:30 and they close at 5 pm, I tried calling and again nobody is answering! Eventually the service adviser answers and the call gets dropped! Called again nobody answering. Called again and the foreman who I wanted to talk to anyways answers and the call drops again! Finally I get through and told the foreman that I didn't want to be an ass but was ready to blow a gasket! Nobody answers the phones and when they do, you're on hold forever, no follow through with service advisor, parts dept., and customer. Once I got that off my chest, the foreman said they had problems locating the parts but finally located the bolts in LA and the gasket in Cincinnati and can have them overnighted on Wednesday, then they would check into the turbo after that part of it was fixed. What?! I told him that if they tried running the truck without further investigating what's blowing the gasket they were going to blow the gasket again. I now feel like I'm dealing with a bunch of incompetent sloths. That 2.9 review rating was too high! Too bad they were the closest Isuzu dealer and we really had no choice but to take the truck there. 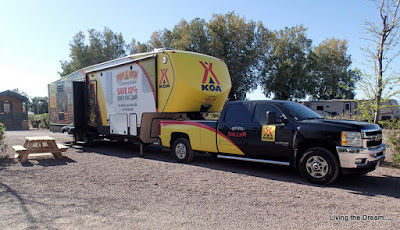 Late in the afternoon, this KOA truck and fifth-wheel arrived...not sure what the purpose of it is. Does it just drive from KOA campground to KOA campground advertising? Inspecting?....

Well, that's it for now...we'll have to see what tomorrow brings, but I somehow think we are going to be here much longer than we want to be!!