We were up and on the road this morning by 7:30. There was a light cloud covering today...hey, what happened to our nice blue sky?? We took the main route back to Hwy 2 rather than the so called scenic route. The road was in much better condition and we found it more scenic than the other one, seeing deer along the way.

We passed through Prince Albert, only stopping at the Flying J to fuel up. It was a pretty uneventful drive as we headed south but we did notice that the cloud covering was starting to look thicker. There hadn’t been any rain in the forecast when we checked yesterday...nah...it won’t rain. Well, about 45 minutes outside of Saskatoon it started to pour! Great...no wipers! It was a very stressful 45 minutes aided by Serena who kept telling us to turn off the highway where there weren’t any roads. There is a lot of highway construction/maintenance going on so perhaps that confused her....


We finally found Sherwood Chevrolet-Truck Centre, our destination. Steve went in to take care of the paperwork while I waited in the truck...just thankful we had made it! Steve returned and said I can’t believe it...their medium duty mechanic is on holidays and the mechanic he spoke to went into this long explanation about how Isuzu and GMC had a falling out years ago and they no longer service Isuzu. Steve told him it’s known as a GMC in Canada with an Isuzu engine and is known as an Isuzu in the USA. The mechanic leaned back and looked out the bay window and said oh it’s the T series GMC not the smaller W series Isuzu. Sorry about that. They told Steve they did have a mechanic on that was able to trouble shoot wiring.
There is a gravel lot across the street where they store their new pick-up trucks and they said that we could drop the 5th wheel there. So away we went and did that and brought the truck back...to wait for its turn with the technician.


Jennifer, our service rep, directed us to the customer lounge and also said they have a shuttle that could take us over to the mall if we wanted. We took her up on the offer thinking it was an “inside” mall but it was a big strip mall with Walmart, Home Depot plus a bunch of other stores with a few fast food places. But there was a Tony Romas Restaurant, so that is where we headed for lunch. It was just noon and we hadn’t had much to eat this morning except for a couple of granola bars. We had a great lunch, sitting watching it just pour outside. Well, we won’t be “wandering” around this mall...so we called for a shuttle back to Sherwood Chev.
Once back, we learned the fate of the truck....what had happened is that when Al (fellow from Whyte Communications) put the fuse block back into its receptacle (in the cab dash in front of passenger seat) he ended up stripping a wire which shorted and blew a fuse in another fuse box that was located back under the ATV box of the truck. Nobody knew this other fuse box existed and all of the fuses in the truck are very unusual...not your standard automotive type. So they were just waiting for a replacement fuse to be delivered. Whew...that doesn’t sound too bad. The first fuse delivered was the wrong one so they had to source it again. So it was something to do with the camera installation. Steve called Al and explained what had happened. He was very apologetic...Whyte Communications would be paying that bill. We had arrived at the dealership at 11:30 am and finding the problem didn’t take them long...however the fuse fiasco held us up until 6:00 pm!! 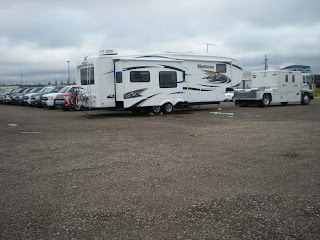 We spent the night at the gravel lot where we had dropped the trailer. We were going to watch a movie—Steve had even hooked up the generator (at least we didn’t have to worry about bothering our neighbours with the noise)—but by the time we had dinner and cleaned up, it was late. So Steve decided to go to bed and read while I worked on the blog. I knew that it would likely be awhile before I had internet connection again, so I wanted to get it up to date.
Posted by Dianne and Steve