Ughh....what the heck did I do last night? I blame it entirely on the Long Island Iced Teas. Apparently, I was quite entertaining last night...lovely! I actually didn’t feel too bad when I first woke up but as the morning wore on...well, let’s just say I needed to lie down. So that is the kind of day I had. 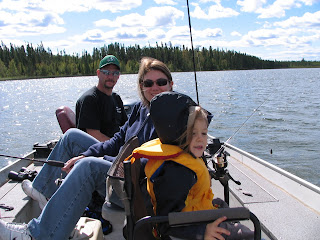 Just after 2:30 Steve came in to tell me everyone was going fishing...okay, I’ll stay here and keep the campfire going. That’s about as much energy that I had. They were going to a smaller lake about a half hour down the road. It was still very windy out making it impossible to go out on Reed Lake.

So I had a quiet afternoon of lazing by the fire in my recliner chair. I did manage at one point to garner up enough energy to go get a pot full of water, heat it and do up the dirty dishes. But other than that, I spent the day in my chair by the campfire, either snoozing or doing Sudoku. 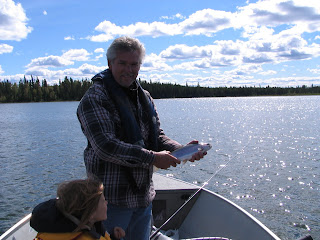 It was 7:15 p.m. before all the fisher people returned. I must say that I didn’t expect them to be gone quite that long! It was starting to get a little eerie being all alone in the campground...I think there was one other couple way over on the other side but other than that, it was totally empty. They had had a good afternoon of fishing. Steve was trying to teach little Calum the fishy fishy bite song. After Steve landed the first fish Calum put more effort into the song and reeled in a 23½” rainbow trout with the help of Auntie Kerry. Not bad for his first fish. It was more like a small salmon then a large trout. 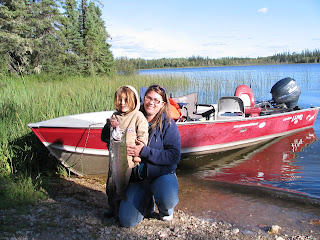 Dave and Kerry provided a great dinner of steak, prawns, baked potatoes and mushrooms for everyone...which we ate fashionably late. After a quick clean-up (gotta love paper plates), we sat around the fire. I said my good-nights around 11:00 p.m. and headed to bed...Steve wasn’t far behind me.
Posted by Dianne and Steve