It was cloudy and cool this morning. After our usual slow start to the day, we headed down to the gatehouse just after 10:00 to register and pay for our site. We find Ontario Provincial Parks to be fairly expensive, particularly in comparison to Manitoba’s. At Clearwater Provincial Park in Manitoba our site was $18.90/night with electrical hook-up and free firewood...here our site is $46/night with electrical hook-up and firewood costs $6/very tiny bundle. Mind you, we are in a premium waterfront site so we are paying a little extra...I think the regular site is $42.75/night. One thing we have been pleasantly surprised by is the site sizes in the provincial parks that we have visited. All have had sites large enough for us to get into...I don’t think we would have had as much luck in BC’s Provincial Parks.
As we were registering and talking to the very nice lady at the gatehouse, we mentioned how bizarre the electrical hook-ups are...she agreed, and pointed to a stack of 50‘ heavy duty extension cords on the floor. They loan them out for those who need them...and they are 30 amp cords...so we paid the $100 refundable deposit and took one! Once all paid up, we returned to our site to plug in the new extension cord only to find that it was about 6 feet too short...so back Steve went to the gatehouse to get another one and paid another $100.00. 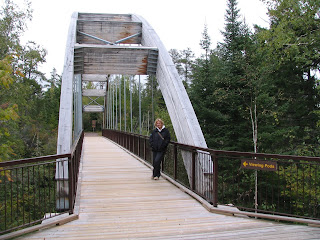 Okay, we`re all ready to get on with our day! We had decided to drive to Ouimet Canyon which is about 30 kms further east down the main highway...so with the 35 kms back to the highway from here, it was about 60 to 70 kms. But well worth the drive! They call it the Grand Canyon of Ontario...very cool! We went on the 1 km walk to both lookouts...a great walking trail with incredible views at both lookouts!


Here is a picture of one of the lookouts at Ouimet Canyon....followed with a view from the lookout... 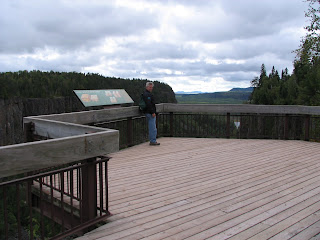 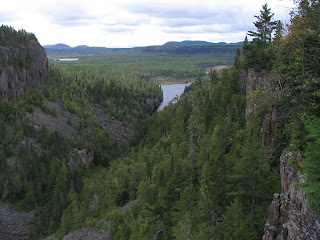 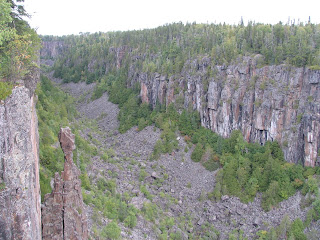 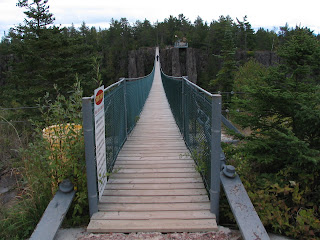 On the road in we had noticed a turnoff to Eagle Canyon Adventures, boasting the longest suspension bridge as well as the longest zip line ride in Canada. So we determined that that would be our next stop...no, I am not zip lining! But I would like to try to make it across the suspension bridge. As it turned out, I just couldn`t make myself go across the deep canyon on this narrow little bridge that moved every time you took a step! There were 2 bridges...a short one 300’, and a longer higher one 600’...and the idea is that you cross over the canyon on the short bridge, walk the trail up to the longer bridge and return over the canyon. I did make it part-way out onto the bridge but all I could think of was having to come back across on the much longer higher one! So nadda...not going to do it! Steve continued by himself and I walked up the trail to meet him on his return trip across on the long bridge...which is also where the zip line starting point is. I did try walking out to meet him and didn`t do too bad until some other people came along...that got the bridge moving...I immediately turned around and made my way back...desperately resisting the urge to get down on my hands and knees and crawl! 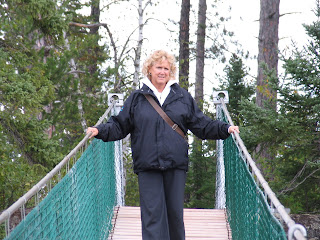 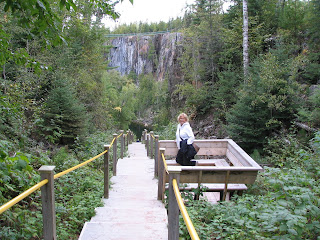 After a chat with the zip line operator, we started our return walk that goes down into the canyon...they have built a cement stairway that goes all the way down to the canyon floor...what a job that must have been!
The trail then crosses over the river and under the zip line run. We watched one woman take the ride down and as we got closer to the end of the trail, we noticed that she had not made it quite far enough to the landing platform so the fellow had to go out in a row boat to attach a line to her, then row back to the landing and pull her in. We watched as her husband came down...making it to the platform...and then continued on back to the truck. Steve wished that he had taken the zip line ride...maybe next time. 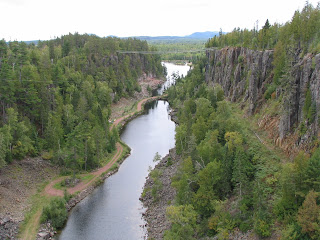 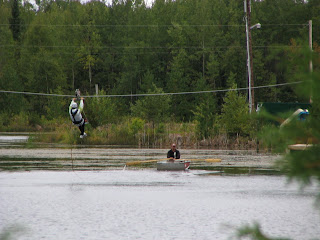 The next item on the agenda for today was to purchase fishing licenses. We had been told the closest place to get them would be at Crystal Beach which was about 10 kms on the other side of our turnoff to the campground...going west back towards Thunder Bay. Steve got his license but I decided not to bother...I just couldn’t justify the extra cost...I’m just as happy going for a boat ride.
After fuelling up at the Esso station at the truck stop by our turnoff to the campground and then stopping at the LCBO (Liquor Control Board Ontario) agent across the street, we headed the final 35 kms back to the campground, arriving home just after 4:30 p.m.
The sun made a brief appearance as we sat outside enjoying our lakefront view with our bevies. After an absolutely fabulous barbequed steak dinner, Steve got the campfire ready while I cleaned up inside. Not having much firewood, he waited until I came out before lighting it. We supplemented our wood supply by scrounging for dead branches around the campsite...not supposed to but we considered it just cleaning up the site.
We spent the rest of the evening sitting in front of the campfire and talking to family and friends via the cell phone. We’re 3 hours ahead of everyone back in BC so they are just finishing dinner as we are getting ready for bed! We finally connected with Nancy and Rob; Steve spoke to his Dad and also called his sister, Nadine. It’s so good talking to them all!
Posted by Dianne and Steve