We woke to sunshine again today but the wind was back. After breakfast we decided to go for a badly needed power walk around the campground. A truck and 5th wheel had pulled in yesterday and the truck was a big International semi-tractor type, so Steve wanted to stop and talk to the fellow about the mileage he gets. We chatted with him for a bit...there is hope for us...he agreed with what we have been hearing—mileage gets better as the engine wears in...he’s getting around 10 mpg. 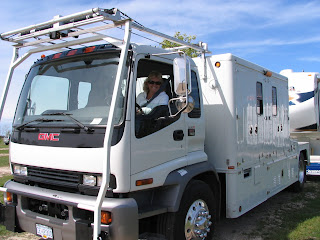 Back home, I completed the renewal applications for our passports. We plan on taking them into the passport office in Winnipeg tomorrow. I also called Linda to invite them over for dinner tonight. We thought we would barbeque some steaks that we had picked up at Costco yesterday. Okay, it’s set...they’ll be over after 5:00. I wanted to go to Safeway just to pick up a couple of last minute things for dinner, so Steve suggested I take the truck and go by myself. My first thought was...yikes! But then I thought...hey...no problem...so away I went...

What I found out was that Winnipeg closes down on a holiday Monday...today was Labour Day...and nothing was open! Well, I did find a Shoppers Drug Mart open and this particular location sold some groceries so I managed to pick up what I thought was an ice cream cake...as it turned out, it wasn’t...and it wasn’t very good either. I also managed to find some fresh corn-on-the-cob at a roadside stand...so we were good for dinner—steak, nugget potatoes, salad, corn and desert. What I hadn’t been able to get was the special beer Brian drinks or a bottle of red wine for Linda...so I had to make a very embarrassing phone call to Linda—they would bring their own beverages.

Brian and Linda arrived just before 5:30. We had been hoping that it would be nice enough to sit outside but it ended up being too windy, so we sat inside. Steve did a great job barbequing the steaks and we had a lovely dinner. After stuffing ourselves, we decided to go out for a walk so while the coffee was brewing, we had a stroll around the campground. Upon returning, we settled in the comfy chairs for cake and coffee...coffee was good...cake not...oh well.