It was cloudy and windy this morning, but no rain yet. We had originally planned on leaving today but with the forecast for rain...not showers...today, we decided to postpone our departure by a day. If we hadn’t cleaned the truck and trailer we would of pushed on.

We really didn’t do much today. Steve spent some time applying some rain protection stuff to the truck windows and when he had finished he suggested that we walk into town and go out for lunch. What a good idea!


It was pretty quiet in town today...it was windy, cloudy and cool. We had our umbrellas with us as we were expecting the rain to start anytime now. We chose the Wigwam Restaurant for lunch. It was built by Swedish craftsmen from a nearby town and was one of the first businesses established in the townsite. It is a very cool log building that has been designated a heritage building. There’s quite a history to it.
After a great lunch, we thought we would take a walk down to the end of the breakwater before heading home. But as we got closer to the water, it was so windy and cold that we just turned around...still no rain yet, though.  We did stop at a First Nations Museum/Community Centre... 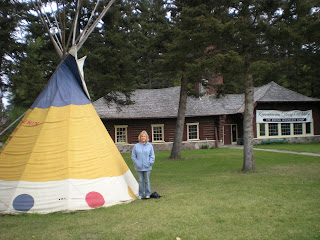 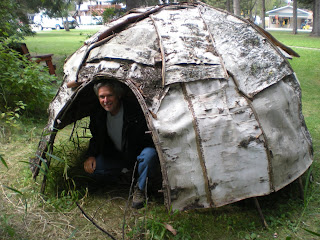 Back at the campsite, Steve started a fire and we just spent the rest of the afternoon relaxing by it. The sun actually tried peeking out a couple of times...and no rain yet...they can’t seem to forecast weather any better here than in BC!

So as it turned out, we could have made it to Winnipeg today before the rain set in...it was 5:38 (precisely) when we put the chairs away and headed inside because it had started to rain.

Well, I wonder what it’s going to do tomorrow...the forecast is for cloud and just an occasional shower...hmmmm....
Posted by Dianne and Steve