Before leaving this morning, we had to go back to the dealership to call Whyte Communications so they could pay the bill via phone. By the time work had been completed last night, they were closed. After we were all squared-up, we said our thank you’s and goodbyes and we were off...not very far, though, just across to the mall to pick up a few groceries at Walmart. Steve also needed to buy some axes (since we had forgotten ours back home) but had no luck at either Walmart or Home Depot.
It was 11:30 by the time we were on the road, trusting that Serena would guide us safely out of the maze of roads to Hwy 41. We were heading northeast. After yesterdays rain, it had been very foggy when we first got up but the fog had burned off and it had turned into a nice day. 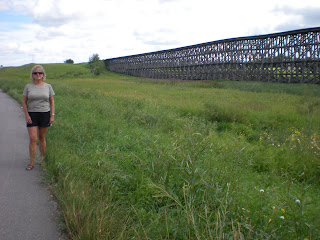 A couple of hours into our drive, we stopped at a pull-out to have a stretch and our lunch. It was by a neat old railway trestle...

Once back on the road, Steve noticed that the “Service Engine” indicator had come on in the truck...great, what now? And the cruise control wasn’t working. Good grief, we seem to be plagued with problems! Gee...and we just left a GM dealer...go figure! After our conversation with the GM Customer Service person the other day, we knew that there was a dealer in Tisdale which was on our route. As it turned out, there was also one in Melfort so we pulled in there. They were unable to help us but he called ahead to Tisdale (about a half hour down the road). They would be able to plug us into the computer and at least see what the problem was. After leaving Melfort, the cruise control started working but the “service engine” light was still on. The mechanic in Tisdale said he had never seen one of these trucks but should be able to get the fault code for us to see if it was safe to continue on eventually to a dealer in Winnipeg after our visit with Dave at Reed Lake. The fault code said EGR (exhaust gas recirculation) so it was safe to continue on. The mechanic said it was normal for the cruise control to stop working when the service engine light comes on. Eventually the service engine light went out. 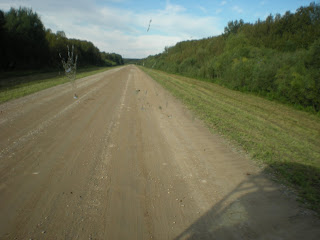 Tisdale was the deciding point on which route we were going to take...carry on east until just inside the Manitoba border then head north...or...go north up to Nipawin and then east to The Pas, Manitoba. We chose the later...which proved to be a mistake. About a half hour or so out of Niapwin, heading east, the highway all of a sudden turned into a gravel road...what the heck?!There was no warning and according to the map, the highway was marked in red, not gray. So we had a very slow, bumpy ride all of the way to the Manitoba border...it took us over 2 hours on the gravel road. At first, we were lucky if we got up to 30 kms per hour but eventually the road did improve somewhat and we were up to 60 or 70. We were very happy when we finally reached highway 283 in Manitoba...pavement, yay!

We arrived in The Pas at 7:30 p.m...okay, where are we going to stay? I don’t think they have a Walmart parking lot here...but they do have a casino! After filling up with water at the Shell station, we found the casino just a short distance down the highway and pulled into a corner of their huge parking lot. Before we got all set up, we thought we should go ask in the casino if it would be okay. After checking with Security, she gave us the green light and we went back out to level the trailer and put the slides out. 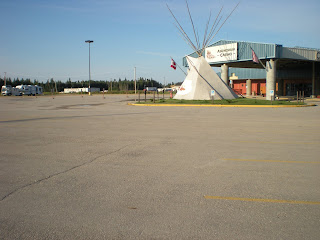 After a couple of drinks and dinner in the Casino restaurant, we returned to the trailer. It was 10:00 p.m. and Steve was exhausted from the drive so it was right to bed for us.
Posted by Dianne and Steve