Well, it has been 2 months now...yes, 2 months ago today we set out on our journey! Wow, the time has just flown by! And what a blast we have been having! We’ve travelled 5277 kilometres and our fuel mileage has worked out to 8.3 miles per gallon...yikes...but we have been told by those with diesel engines that our mpg should increase as the engine breaks in....HERE’S TO HOPING! We’ve had a few bumps along the way but it’s all been good and we are looking forward to many, many more months...and years! Although it has seemed like we were just on a long vacation, I think that it is starting sink in now...we are actually retired! We seem to be settling into this retirement thing quite nicely!

Our plan for today had been to go to Grey Owl`s cabin, however, when we realized that it was an 8.9 km hike one-way, we changed our minds...don`t think we are really up for an 18 km hike! Instead, we decided to drive to the Bison Enclosure and Lake Audy. 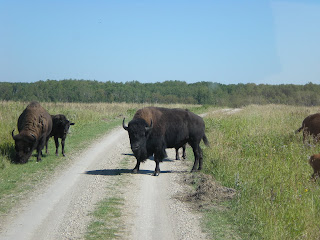 We had our usual slow start this morning...it was exercise day, so by the time we both went through our exercise routine, had showers, breakfast and cleaned up, it was noon by the time headed out. We drove the 39 km to the Enclosure and upon entering; we soon came upon the herd. As a matter of fact, they were blocking the roadway. We saw the babies with their mom’s right up to the huge bulls. It was very interesting as the herd moved off the road; the last to move was a big bull...it was like he was challenging us to move before the herd had gotten safely off the road. 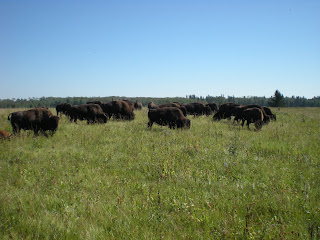 After the drive through the Enclosure, we stopped at the Audy Lake campground and then continued onto the Audy Lake Dam. This was also the trailhead for some very long hikes and there were a couple of Canada Parks people with horses preparing for a ride. A horseback ride...that would be fun...I’d love to do that! I’ll have to check into that. 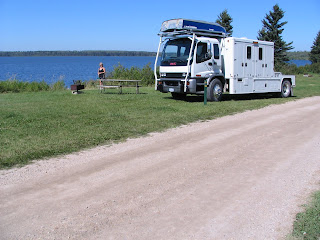 This is Dianne standing on the dam... 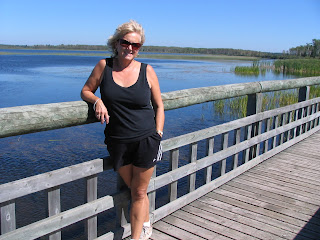 The Parks people going out on horseback... 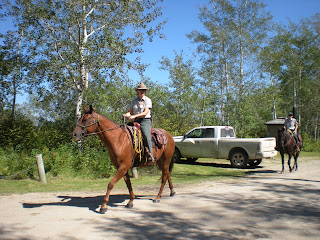 We were back home by 3:00 p.m. and Steve decided to wash the trailer awnings. The truck and trailer both are in bad need of a washing and there didn’t appear to be anything thing in the regulations that said we couldn’t wash RVs at our site. Mind you, it seemed very unlikely that they would have many visitors to the Park that would want to wash their rigs. 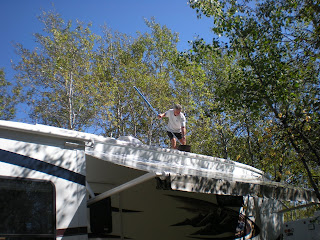 I helped Steve get set up and while he was on the roof of the trailer washing the awnings, I decided to take a walk into town. I needed the exercise plus I also wanted to pick up some eggs and bananas. I had a good 40 minute walk and upon returning, Steve was washing the back of the trailer. His plan is to continue washing the back and the front of the trailer today...finishing the rest up tomorrow. The back of the trailer is covered with road tar splatter from all the construction zones we have been thru since Kelowna. Steve is not a happy camper about that clean up job.....but it still beats working!
It was 5:30 by the time sat down to relax with a bevie. It had been a beautiful day...the hottest here so far...and it was a lovely evening.
Posted by Dianne and Steve