We had a pretty quiet day today. It was almost noon by the time we ventured out of the trailer...yes, we had a very lazy morning. We went down to the gatehouse to pay...but it wasn`t open. I guess this park is completely on self-registration now and the only park office open is at the main, bigger campground at Agawa Bay. We both agreed that we chose the wrong campground in this park...but we were only going by what we were told. Not having any cash, I wrote a cheque, filled out the registration envelop and deposited it in the slot. 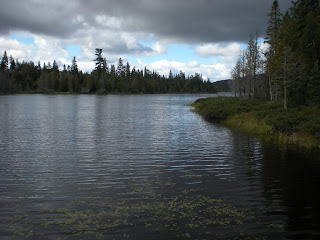 We walked down to the boat launch area for a look at the lake and then continued around the loop. In addition to the usual outhouses throughout the campground, there is a building with washrooms, showers and a laundry room...one washer and one dryer. The washer had a sign on it recommending that you do not wash whites due to the high iron content in the water...hmmm. 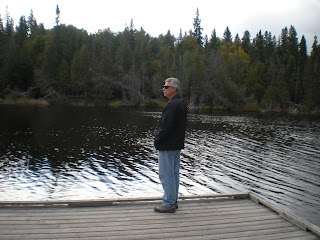 It was mostly cloudy out but the sun did manage to make an appearance off and on...so when we returned to our site, we pulled the chairs out and sat in the sun during one of its appearances. One thing we have really been plagued with over the past few weeks is wind. We have had so much wind! And I`m not talking just a breeze...but very high winds! Steve is wondering whether he is ever going to be able to get out fishing in his boat.

After the sun disappeared, and with the wind, it was rather cold so we decided to go for a walk...this time we`ll walk down to the other loop and take a look. It was a much narrower road with small sites...good thing we realized our mistake early yesterday and backed out when went it was fairly easy to do so!

While walking the second loop, we noticed another trailhead to Peat Mountain...there is also one beside our campsite...so we decided to head back to the truck, get our walking sticks and bear bell and take a look. It was a nice little trail that we thought would just end at the second loop but we came across an information kiosk describing the trail. It was an 11 km hike that goes up to Peat Lake and another lake...allow 5 to 7 hours and ensure you have proper footwear as it is steep and slippery in places...hmmm...guess we`ll just be happy with the little hike we did getting to that point...it must have been about a kilometre or so. 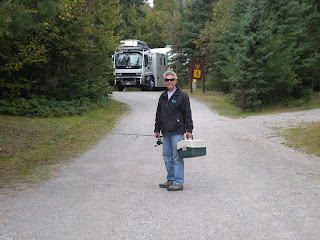 Back home after our hike, Steve decided he was going to take his fishing rod down to the lake and give it a try. I made myself a salad and once finished, I was on my way down to see how he was making out and take some pictures just as he was coming back. I guess it was too weedy trying to fish from shore and the wind didn’t help any either.
We tried to sit outside but it was one of those days where it would start to rain and as soon as you put your chairs away, it would stop...so you`d bring your chairs out again, and as soon as you sat down it would start to rain again...and so the cycle continues. Fed up with that, we went inside to watch TV.

And that was pretty much our day. We have decided to continue on to Sault Ste Marie tomorrow. When we were at Traveller’s RV Resort in Winnipeg, Steve met a fellow from Sault Ste Marie who gave us his name and phone number along with a couple of recommended campgrounds. He was quite adamant that we were to call him and he would show us around the area...we have decided that we might just take him up on his offer.
Posted by Dianne and Steve