I was up extra early this morning...5:30 to be exact...just so I could have my morning coffee. I find that the thought of having to get up, showered and ready to go right away very distasteful these days...too reminiscent of my "working days", I guess. I much prefer to at least have one cup of coffee before I have to get moving! 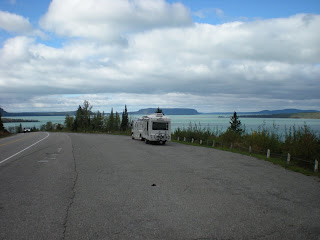 We were all packed up and after a stop at the sani-dump, were on the road just after 9:00 a.m. It was a beautiful sunny morning but there were clouds in the distance...in the direction we were headed.
It was a beautiful drive with the highway following the lake’s north shore as we headed east. 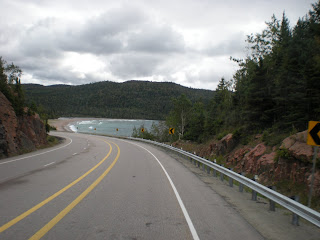 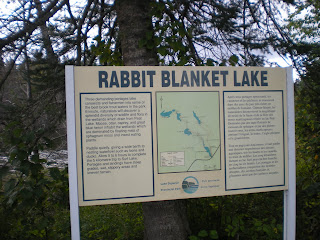 We made a few stops along the way with our final one in Wawa for fuel about 20 minutes before we reached our destination, Rabbit Blanket Lake Campground in Lake Superior Provincial Park. There are 3 campgrounds in this Park...and we were told at Sleeping Giant that this one would be our best bet as far as finding a site large enough for us. Hmmmm...I wonder if she really knew what she was talking about. As we started driving through, there were no sites large enough for us so when we came to the entrance to another loop, we thought we would take it...big mistake...as it turned out that was the tenting section. Okay, now we had to back up. Managing that without too much trouble, and after hearing from some others that there were a couple of large sites at the other end of the first loop, we continued on. Whew...yes, there was basically one site that would work for us. As usual, with a little manoeuvring, Steve managed to get the 5th wheel backed in. Again, the electrical box is out at the road requiring an extension cord. Okay...we are definitely going to have to invest in a new 30 amp extension cord. 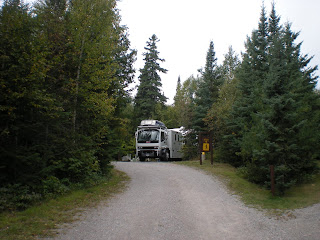 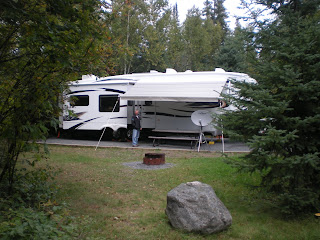 It was after 8:00 p.m. by the time we were all set up...it had been a long day and we were tired...especially Steve...that had been a long drive! We surpassed the 10,000 km mark on the truck today! We are also more than a 1000 km from the Manitoba border and still a long way from Quebec. Ontario is a huge province.
Posted by Dianne and Steve