We were up and relaxing with our morning coffee when the phone rang...it was 7:30 a.m.  I glanced at the call display...“Garth & Donna Whittome”...awesome; we were planning on calling them to plan a visit.  They live in Nanaimo so we thought we would drive up and see them next week.


My cheerful greeting as I answered the phone quickly changed as Garth told me there had been an accident.  He continued to say that he and Donna had been walking the trail in Helliwell Provincial Park on Hornby Island with friends when Donna got too close to the cliff edge.  He always keeps a pretty close eye on her while walking because she has balance problems but said he had turned his back on her for a short period.  He turned to see her arms outstretched as she unsuccessfully tried to regain her balance.  He watched totally helpless as she plummeted roughly 20 metres/60 feet to the rocks below.  Such a tragic accident...  Garth was obviously still in complete shock as he described the event...how do you console someone who has just lost the love of his life?  He stood there helplessly 60 feet above her and waited for rescue crews to arrive....how awful would that be?!
So instead of the planned visit with them next week to catch up...it had been just over a year when we last saw them...we will be attending a “Celebration of Life” on Saturday afternoon. 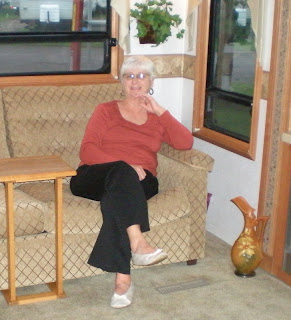 As a tribute to Donna, we’d like to tell you about this wonderful couple...few people have an impact on your life as they did.   After 51 years of marriage (54 years together), they were true soul-mates...totally in love and very respectful of each other.
We first met Garth and Donna when we lived at Oceanside RV Park in Saanichton prior to our retirement.  They were our new neighbours that had just arrived in their fifth-wheel a couple of days before we got back from Rob and Angie's wedding in Punta Cana....that was in early April, 2010.
Like us, they were just moving into their  fifth-wheel to get settled in before retirement and life on the road as "full-timers".  Donna had managed an apartment building while Garth was still working as a truck driver for BC Ferries.  He was retiring at the beginning of June and they would be heading off on their adventures.
We soon became fast friends...so much to talk about...we were total newbies to full-timing...I believe they had done it before and were going to go for it again.  They shared all sorts of tips and tricks with us.  Since Garth was a truck driver, he offered to help Steve with the endorsement he would need to tow the fifth-wheel.  This involved taking a road test with Motor Vehicles...so after going out, with Garth in the passenger seat, and towing our trailer, it wasn't long before Steve was ready for the test.
Garth and Donna became our “substitute parents”...although they really weren’t quite old enough.  I think my fondest memory of Donna was arriving home after work and she would be sitting outside talking on the phone and she would yell... “The kids are home!”  Too funny!
We were also included in a gathering of family and close friends to celebrate Garth’s birthday.  There wasn`t a lot of room for a large number of people to gather in the RV site, so Garth asked to use the park`s group picnic shelter.  It was a cool Sunday afternoon so having the shelter was great.  We also met their son and daughter-in-law....a lovely couple that live in Victoria.
On Garth’s last day of work he came home with the left-over’s of a going away cake and shared it with us after dinner...it went well with the wine/beer that we were having as we toasted his retirement.  They would be leaving the next day...but needless to say, we would be staying in touch!
Originally from northern Saskatchewan, they were taking the BC Ferry trip from Port Hardy to Prince Rupert and then making their way to Nipawin to visit family before continuing to Orangeville, Ontario...and an RV park fairly close to one of their daughters who lived in the suburbs and worked in Toronto. 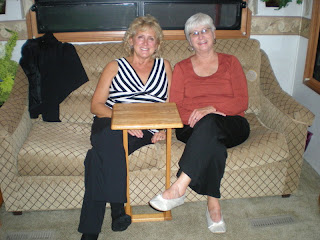 We always said that if our journey took us anywhere near where they were going to be, we would get together.  So when we decided to head to Niagara Falls, we made Orangeville a stop along the way.  On September 28, 2010 we arrived at the RV Park and into a site next door to Garth and Donna...just like old times! It was raining so hard we decided to delay setting up and joined Garth and Donna in their rig. We hadn’t seen them for 4 months...and had a lot of catching up to do.  When the rain let up we decided to go out to eat but when Garth opened the door we discovered that our sites were under several inches of water. Before you know it Garth has his shoes and socks off and heads out to his truck....dropped the tailgate and backed up to the door of his trailer and the 3 of us hopped into the bed of the truck...too funny. We spent 3 days visiting and touring around the area.
Donna and Garth...preparing dinner... 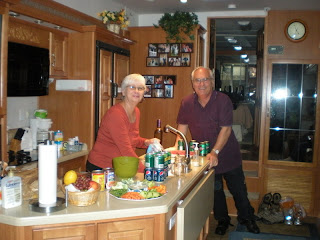 We stopped for a bite to eat at a cute little cafe... 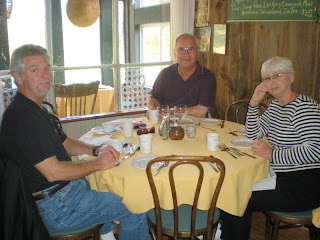 We met their daughter and son-in-law at their home then drove into Toronto for a Mexican dinner... 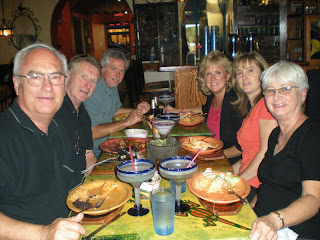 They were spending a month or so in Orangeville and then were going to head south...and Wyoming to visit another daughter and her family.  After that, they would be going to Apache Junction, Arizona where they plan on spending the rest of the winter. 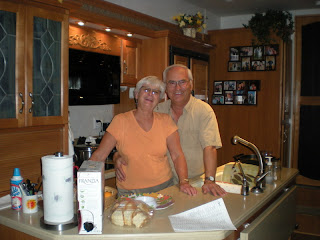 We had no idea what our plans were but, yes, if we are near Apache Junction, we will definitely connect again.  So on March 2, 2011 we again pulled into the RV Park where Garth had reserved a site for us.  This time we weren’t next door to each other but only a few sites away.  It had been 5 months since we had seen them...lots of catching up to do! 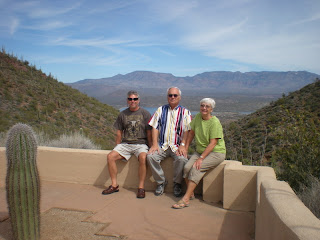 We were treated royally and given a tour of the Roosevelt Dam and surrounding area. The day we left we met their daughter, son-in-law and grandkids from Wyoming that had arrived the night before. 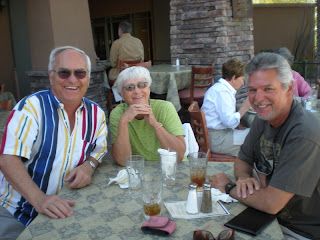 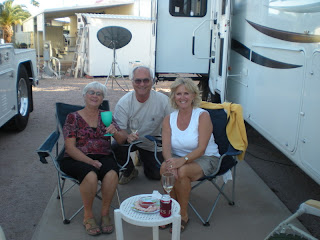 And that was the last time we saw Donna...upon their return to BC, they decided to settle in Nanaimo.  They bought a nice park-model in a trailer park and sold their 5th wheel.  Although they loved the travel, they missed the continuity of a group of close friends.  We spoke on the phone when we were back on the Island last spring and kept in touch via email.  Since we hadn’t seen them in over a year, we were really looking forward to getting together with them this year.

But it is not to be...we will see Garth and family on Saturday.  Rest in peace, Donna...you will be sorely missed....
Posted by Dianne and Steve 1 comment: