Well, we didn’t get on the road as early as we had planned...it was about 10:20 by the time we had finished packing up, slowly made our way around the windy campground road to the sani-dump, done our thing there and were finally on the road.
It was a long, uneventful drive south on highway 10 towards Riding Mountain National Park. It rained most of the way, making it a tough drive for Steve and just not that pleasant. The highlight for me was when we were just outside of Swan River and I thought I would check my phone just to see if I had any signal...and I did! We had been without any cell or internet connection for almost 2 weeks. I was able to update my Facebook status so family could see that we were alive and well. 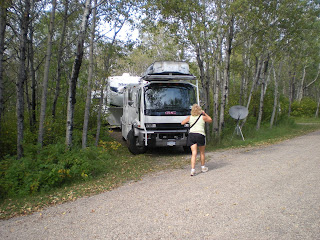 We arrived at Wasagaming Campground in Riding Mountain National Park just before 5:00 p.m. They have full hook-up sites...bonus! It’s a big campground, having 506 sites and very unusual to find that it has fully serviced sites that aren’t just set up in a side-by-side parking lot style. The girl at the registration kiosk had given us a map with all available sites that would be large enough for us, so we spent a good deal of time driving around checking out which one would suit us. The roads leading into the sites are easily accessible by big rigs and the sites are separated by lots of trees and shrubs. The only issue we had was that the sites are not level...and not all that wide for RVs with slide-outs. We selected site 54. Our set-up took us a little longer because once we got the 5th wheel level, we thought we would put the sliders out before unhooking from the truck...it looked like one of the sliders might be a little too close to the power post. Sure enough, it was too close, so we had to start all over again and move the trailer over about a foot. Thank goodness we had checked that before unhitching from the truck! 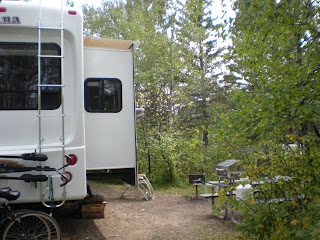 Once we got the trailer levelled and unhooked from the truck, I left Steve to continue with the rest of the set up while I drove the truck back up to the registration kiosk to let them know which site we had chosen, and of course, pay for our stay. We aren’t sure how long we wanted to stay...3 to 4 nights and then head to Winnipeg before the weekend or stay until after the weekend. It was better to pay for the whole week and get a refund if we decided to leave early...rather than take the risk of our site being reserved by someone else.
After we got everything set up, inside and out, we sat outside to relax with a drink before setting up the satellite dish. It was pretty treed, without a clear view of the southern sky but Steve thought he’d try anyway. After much perseverance, he found a signal! Yay!
While Steve was outside setting up the satellite dish, I was inside seeing what kind of internet connection I could get on the laptop. It was a weak signal and very slow, but at least it was something! I managed to get onto Facebook and chat with Chris, so that was great!!! I missed not being able to contact them while we were up north.
Well, needless to say, it was late...after 9:00 p.m....before we sat down to a quick dinner. We watched a little TV....yay, for that satellite connection...and then headed to bed. We have a new area to explore tomorrow!
Posted by Dianne and Steve