It wasn’t a particularly nice day today...it was windy and it rained a bit while I was having my morning coffee. As the morning wore on, though, it was looking a little more promising...at least it wasn’t raining. 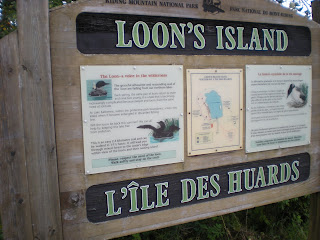 We thought we would do a hike today, so just before 11:00 a.m. we headed out for a short drive to Katherine Lake and the Loon’s Head Trail. The trail was supposed to be a 2.4 km hike but there was a notice at the trailhead advising that part of the loop trail by the lake was closed due to the high water level. We thought we would go anyway...it just meant that we would have to walk back the way we went. Since it was only about the last third of the trail that was closed, we actually had a longer hike having to go back the way we went. It was a rather uneventful hike through the trees and bush...just plenty of mosquitoes. 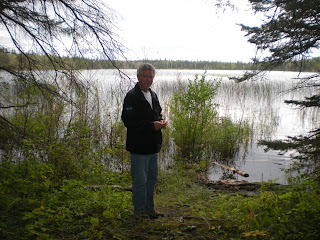 We were back home by 1:30 and after having some lunch; Steve went out to tackle washing the truck. I decided to do a little house cleaning and then go for a walk into town. When I left, Steve had cleaned the cab interior and was just finishing cleaning out the storage areas...he had decided to take everything out and wash them as well. Cleaning the truck is a huge undertaking...he wasn’t finished until well after 6:30...just as a heavy mist was starting. I helped out a bit...apparently I am now the tar removing queen...there were a few spots along the driver’s side of the truck that needed to be taken care of. 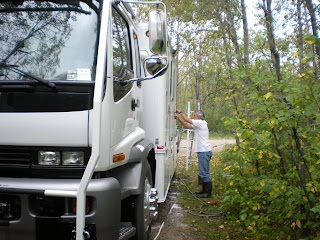 While Steve was busy with the truck, I decided to start a campfire...and was actually successful in getting a good fire going! So I sat by my fire...supervising Steve from a distance...other than doing my tar removing bit, that is.
We had planned on barbequing steak for dinner but in our campsite we can’t have the picnic table under the awning and neither one of us wanted to stand out in the rain barbequing, so I had to go to plan B for dinner...eggs, sausages and toast—breakfast for dinner, it was!
After dinner, we called the kids. We both had a great chat with Angie and Rob...and then Chris. All seems well back home. It’s so good talking to them!
After a little TV, we headed to bed...Steve was absolutely pooped after his afternoon of washing the truck.
Posted by Dianne and Steve