I had been up about an hour by the time Steve got up and headed down to the shower house for a nice long hot shower. After doing my exercise routine with the rubber tubes...yes, we are finally getting back into some regular exercise...I headed down to the shower while Steve did his weight lifting. By the time we had breakfast, it was after 11:00 and time to go out for a walk and explore the area. 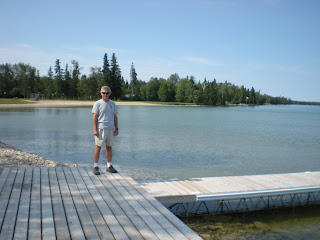 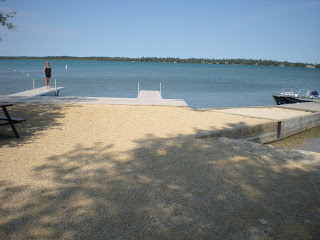 We walked down to the lake where there is a large day use area, boat launch, playground and beach. Clearwater Lake, a deep, clear, cold lake, is renowned for its excellent water quality and large lake trout. The nearly circular lake, 10 miles in diameter, has an average depth of 43 feet. Lake clarity has been measured to a depth of 33 feet. It is spring fed and lacks major inflowing streams which may carry silt...this makes it incredibly clear. The water is a beautiful shade of turquoise blue and looks very much like the Caribbean Ocean...but not nearly as warm! And instead of palm trees, there is a boreal forest surrounding it!

Other than a man just leaving with his 3 kids, there was no one else around...very quiet there today...perhaps it was just too early. Mind you, it is mid-week. As we were heading back to our site, we were stopped by a Conservation Officer. They were trying to keep people out of our end of the campground because of a bear sighting just two sites down from us. He was a young one, probably 2 to 3 years old, and had become used to humans making him very dangerous. Well all righty then....can we just go get our truck and leave? He gave us the clearance to do that so we quickly went to the trailer, picked up keys, got in the truck and got the heck outta there. 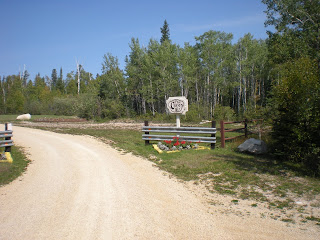 We headed further down the highway towards “The Caves” for a short hike. The caves are not true caves but rather deep crevices that formed when rock masses split away from shoreline cliffs. During its long history, the bedrock was subject to minor stresses that caused fractures. The fractures are usually vertical and when viewed from above, appear like cracks in a sidewalk. Since glacial Lake Agassiz retreated some 8000 years ago, recurrent freezing and thawing of water in the fractures and between the horizontal layers exerted stress on the bedrock. Because the cliff was unable to resist the pressures of freezing water on one side, the fractures have widened into crevices. It was very cool. 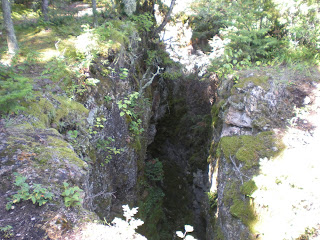 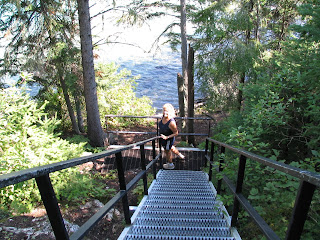 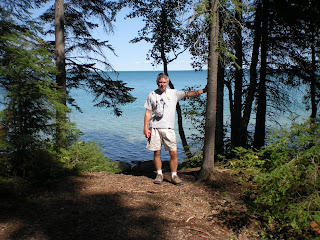 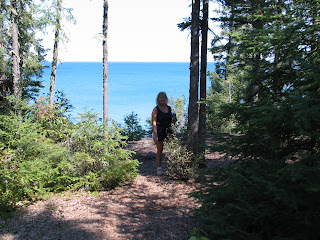 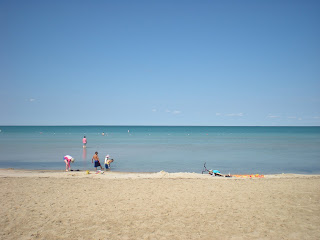 After we were finished exploring that area, we continued further down the highway to the other campground in the Provincial Park, Pioneer Bay. It was not as nice as the one we are in...whew...we were afraid that we would like it better. When we arrived in the park, we thought Campers Cove was the only campground, so we were surprised to find out that there was another one. Of course, we hadn’t discovered this until we had gotten all set up. Pioneer Bay also has a large day use area and beach. There were quite a few families out enjoying the sunshine and sand.
Heading back towards our campground, we stopped at a local convenience store. We had a look around and picked up some milk and buns. While in there, the Conservation Officer that we talked to in the campground came in and said that we were okay to return but the bear still hadn’t been captured. We also asked him about ATV’ing in the area...we had noticed a well worn trail that runs along the side of the highway with trails heading off. He told us to stay off of the cottage roads around the lake but other than that, it sounded fine to explore the trails. So it looks like we will venture out on our quads tomorrow.
We checked out another beach and day use area before heading back to the campground. One thing we have found interesting is that there are numerous cottages and lodges dotting the shoreline around the lake. They obviously allow private residences in Provincial Parks here in Manitoba.
Okay, after sight-seeing for the last few hours, it’s time for some work. Now that we have electrical hook-up, I decided it was time to give the trailer a complete vacuuming and cleaning. Steve spent the rest of the afternoon mounting the cargo box on my ATV. It was after 5:00 p.m. by the time he had finished.
Now it was time to relax before dinner so we sat out by a campfire with a drink...Fresca and Diet Coke were our happy hour drinks today...and yesterday as well. Yes, we thought we should give our old bodies a bit of a break for a few days. With the constant visiting we have been drinking like teenagers since we left the island.
After dinner, we sat out by the fire again. We wanted to wish Brian (Angie’s Dad) a happy birthday so I walked down to the payphone to give the Connelly’s a call. We also wanted to give them a heads up that we were in Northern Manitoba and gradually heading south to Winnipeg. We were looking forward to a visit with them...likely late next week sometime.
While sitting outside, we had been watching the clouds coming in...hmmm...looks like there could be a storm brewing. Not long after we had gone inside to watch some TV we started hearing some rumbling in the distance. Yes, a storm was definitely on its way. It came closer and closer and by 11:00 pm or shortly after, it was in full swing. We were kept awake by incredible flashes that lit up our bedroom and the deafening booms that followed...and the rain was just pelting down! It must have been after 3:00 a.m. by the time it stopped. I would love to have been down by the lake watching the display!
Posted by Dianne and Steve