It was just before 9:00 a.m. when we were on the road again. Not as early as we had planned due to an issue with the bedroom closet. But “Mr. Fixit” took care of it...possibly a warranty issue to have looked at when we find a Keystone dealer. 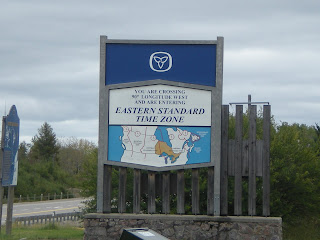 It was a cloudy cool morning as we headed east further into Ontario. It would sure be nice to see some blue sky! It was a pretty uneventful drive...not quite as scenic as yesterday`s. We stopped at a picnic area at the time zone change marker for lunch. It was just before noon when we stopped and after 1:00 p.m. when we were on the road again...we lost an hour...we are now 3 hours ahead of BC time.


After stopping at Safeway in Thunder Bay for a few things, we continued onto Sleeping Giant Provincial Park which is at the end of a peninsula across from Thunder Bay. It`s a huge peninsula with lakes on it...and surrounded by Lake Superior. We arrived around 3:30 p.m., after the gatehouse had closed so it was self-registration. I am glad that I had been able...with such a weak signal...to bring up the campsite map on the internet last night because I knew that the sites in the "200`s" were large enough for trailers and motorhomes over 32`. We filled up with water and headed to find a site...there was only electrical hook-up in this part of the park. 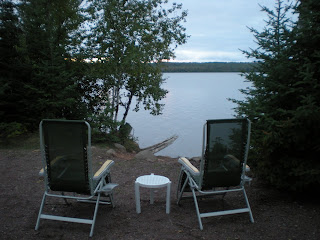 We had quite a time deciding on a site. The electrical hook-ups are insane for the sites on the waterfront...they are situated on the road between every 2 sites! This means you have to have one hellava long extension cord...whereas the sites on the non-waterfront have the electrical box in each site....very bizarre! Of course, we wanted a site on the waterfront (also considered a premium site and more costly!). We finally found one that we figured the extension cord would reach but of course, it was not very level. So after much manoeuvring backing in...followed by digging holes on one side for the trailer tires to level it side-to-side...we only had to level it front-to-back. This is usually the easy part but not this time because the front had to come down so much. But we finally did it! Most campsites have 30 or 50 amp service but here it was 15 or 30 amp. We had already used our one and only 30 amp plug adaptor to connect the trailers heavy duty shore power cable to the extension cord so we had to plug into the 15 amp outlet. By the time we were all set up...including the satellite dish...it was well after 8:00 p.m. We relaxed in our lakefront chairs and watched the sun go down...yes, the skies had actually cleared. 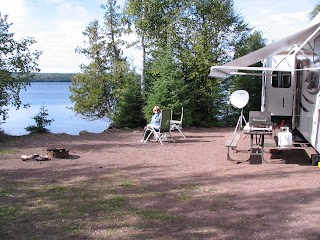 After a quick dinner, we watched a little TV and then headed to bed...looking forward to exploring the area tomorrow...
Posted by Dianne and Steve