We were up and out pretty early this morning...well...it was 10:00 by the time we stopped, paid for another night and were on our way into town. We parked the truck at Station Mall which is close to the riverfront...St. Mary’s River runs between Lake Superior and Lake Huron. There is a walkway along the riverfront so we headed off, camera in hand...looking like typical tourists. 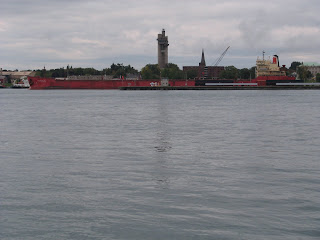 There is a 21’ difference between the lakes so the freighters must go through locks. 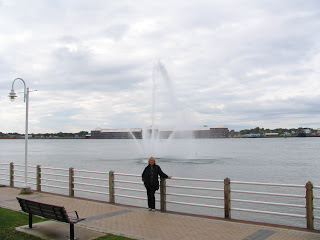 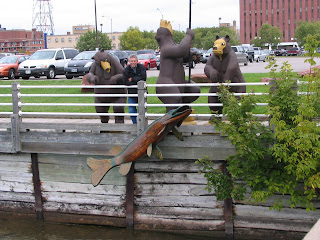 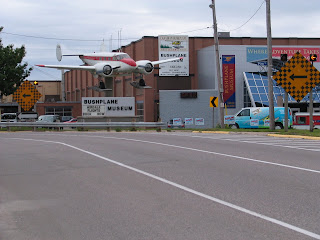 We made our way along the waterfront until we reached the Canadian Bushplane Heritage Centre (http://www.bushplane.com/visitors-canadian-bushplane-heritage/) ...Steve was in his glory! It is a very cool place...very impressive! There is a bush plane that you can sit in and it simulates flights around the area...so we took a tour over Sault Ste. Marie; a flight through the Agawa Canyon to a remote fishing camp; and we even joined the crew of a water-bomber to fight some forest fires. It was all very realistic...no need to take those tours now...we’ve already seen it all! 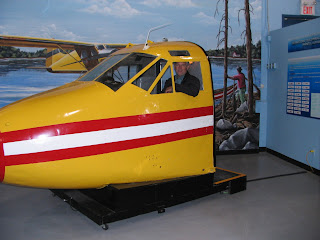 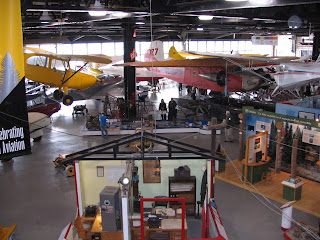 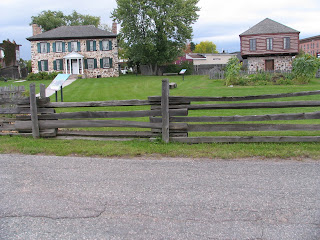 After almost 2 hours at the Bushplane museum, we continued our sight-seeing tour by going across the street to the Ermatinger-Clerque National Historic Site (http://www.city.sault-ste-marie.on.ca/Article_Page.aspx?ID=276&deptid=1). The Ermatinger•Clergue National Historic Site consists of two of the oldest stone buildings northwest of Toronto surrounded by period gardens. The first building, the Ermatinger Old Stone House, is restored to depict the domestic and professional life of Charles Oakes Ermatinger and other prominent residents and visitors of the House between 1808 and 1870 reflecting the nationally recognized historic aspects of the House. The second building, the Clergue Blockhouse, was relocated to the Site in 1996, and was the home of Francis Hector Clergue from 1894 – 1908.
As we entered the Ermatinger House, my cell rang...it was Dave Mason confirming plans for dinner that night. They would pick us up between 5:30 and 6:00...we were going to The Docks...a restaurant on the riverfront that we had passed on our walk that morning.
By the time we had finished our tour of the heritage buildings, it was almost 3:00, so after a quick stop at Timmy’s for something to eat, we walked back to the truck. We still had to pick up our coats at the drycleaners and hit the LCBO (liquor store). I swear that Serena wanted to take us on a sight-seeing tour of areas that we had not yet seen because the route she took us to the LCBO was a great big circle...in other words, a very long roundabout way when a simple left turn would have been a much more direct route...too funny! 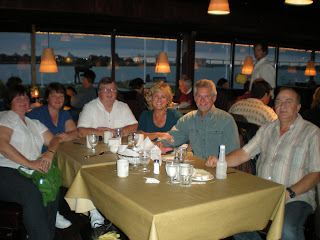 Dave and his wife, Lisa, picked us up at 5:45 and we headed to the restaurant where we met Lisa’s sister, Leonie (she goes by Cookie) and her husband, Armand. The restaurant had big picture windows looking out onto the river, locks and across to the other Sault Ste. Marie which is in Michigan. There is a huge, long bridge that crosses the river and connects the two countries.

After an excellent dinner, we went back to Dave and Lisa's log house for coffee and dessert. Cookie and Armand moved from Kapuskasing, Ontario recently and share the house with Dave and Lisa. What a beautiful log house! It`s in the wrong setting, though...it needs to be on a remote lake somewhere! 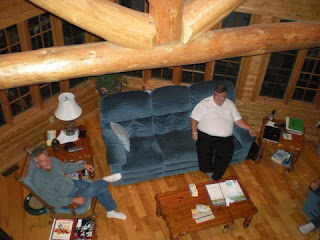 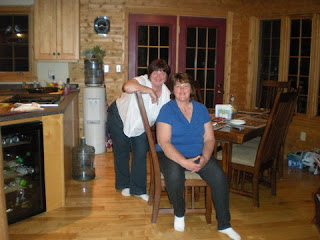 We had coffee (with Baileys....mmmm), dessert and continued our visit until it was time to head home. We were leaving in the morning and I still had a few things to take care of that required the internet...and I wasn`t sure if we`d have connection at Elliot Lake. So after hugs and handshakes, Dave drove us home. We had such a great evening...thanks Dave, Lisa, Cookie and Armand for your hospitality!
Posted by Dianne and Steve