I was up at 6:00 a.m. this morning just so I could get my morning coffee in peace and quiet before it was time to get the trailer packed up. When the sun came up a little while later, it was mostly clear with just a few clouds hanging around...a great day for travelling!

We were on the road by 10:10 a.m. and as we hit the perimeter highway, I gave Linda a call to say goodbye and thank them for their hospitality...it`s always nice to have tour guides show the area. As we continued east, the clouds thickened and it got quite cool. We stopped at the Manitoba-Ontario border for lunch and it was mighty chilly standing out by the picnic table! 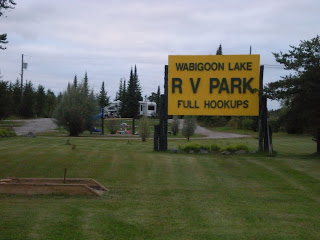 We really enjoyed the drive today. The highway was in excellent condition and there are so many lakes that are right beside the highway...and you can actually see them! We had originally planned to stop at Crystal Lake RV Park which is just outside of Vermillion Bay but it was only 2:00 so we decided to continue on to Wabigoon Lake, just east of Dryden. Unfortunately the RV park we chose was right beside the highway...and there was a train track on the other side...hmmm...sandwiched between the two...brought back memories of the Camping World parking lot we camped in when we first started out! The Wabigoon Lake RV Park will do for a one night stop...it is definitely not a destination park! Once we pulled into our site, we noticed a tag on the water tap saying not to drink the water...great! So we marched back down to the office...what’s up with that?!! Oh...she says...the government makes us put that notification on...but the water is perfectly fine, they drink it. Apparently, they don’t have a water filtering system which would cost $20,000 so therefore they must put those signs on. Well, okay then. We actually have water coming into our trailer go through 2 filters, so we figured that will do.

After we got the basics set up (since it was only a 1 night stop), we sat inside with our newly acquired maps and brochures of Ontario. We wanted to decide on a destination for tomorrow where we could stay put for the weekend. We decided on a provincial park just past Thunder Bay, called Sleeping Giant. There seems to be a lot of cool stuff to explore in the area. 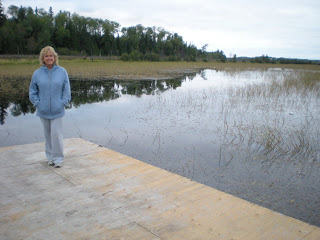 After dinner, we went for a walk down to the lake...very weedy, almost like a marsh. Once back into the warmth of our home, we watched a movie (one of the many downloads from brother Dennis) and then headed to bed early. We wanted to get an early start tomorrow.
Posted by Dianne and Steve