Sunshine this morning...YAY! It sure is nice seeing the blue sky. But it was very cool inside the trailer so I turned on the fireplace when I got up. It seems we have gotten ourselves into quite a routine these mornings...I get up between 7:00 and 7:30, put the coffee on, open the blinds and settle in my recliner with my laptop updating our journal while watching the morning news on GlobalBC. Steve usually gets up about an hour or so later, has his shower and then joins me with his coffee.

This morning was no different...and the blue sky outside didn’t seem to get us going any faster either. I decided that I needed to get some banking done...and with the weak internet connection, it took twice...no three times as long as it should have. While I was doing that, Steve was out unloading our bicycles--we are going for a ride today. We hadn’t used them since we were in Anacortes and they were very dirty having ridden on the back of the trailer thru rain, dust and gravel roads. After a washing, tires pumped up and seats put back on, they were ready to go. 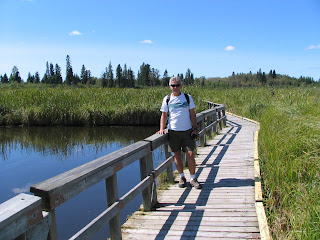 We headed out at about 1:00 p.m. Our first stop was the Ominnick Marsh. It was a 1.9 km boardwalk through a big boggy swamp and marsh. Bikes were not allowed, so we locked them up and headed out on foot. Yup...that’s a big marsh...sure hope that the rather dilapidated boardwalk doesn’t break...I’d hate to end up in that yucky water with the critters that lurk there! 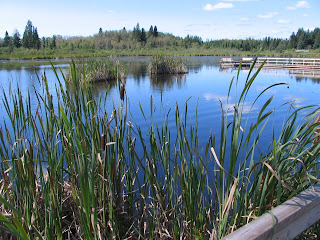 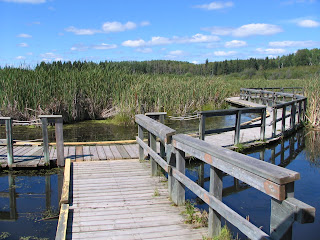 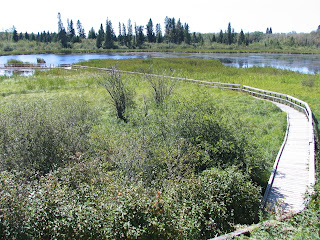 After that lovely walk, we continued our bike ride going along the lakeshore trail. It was about 4.5 km and then we return to town via the road. 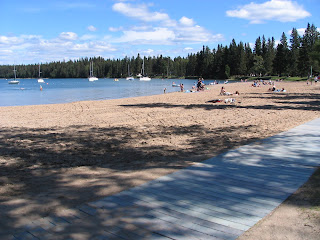 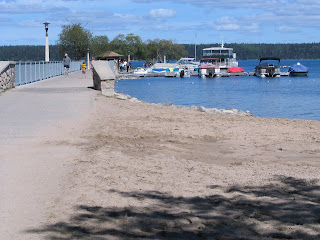 This is a very cool log cabin we saw along our ride... 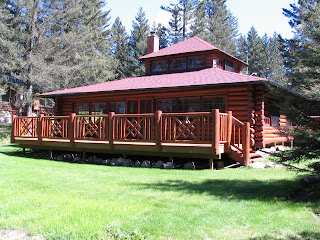 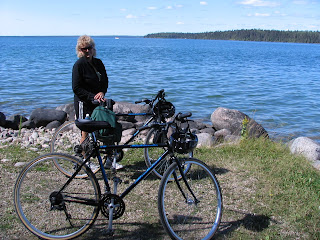 At this point, it was ice cream time so we stopped at the local ice cream parlour...a popular spot with many other tourists having the same idea.
We were back home just after 3:30...a very enjoyable afternoon! We sat out soaking in the late afternoon sunshine until dinner time.
After dinner, Steve started a campfire in the very strange firepits they have here...well, they aren’t really pits...they are on a pole, standing about 3 feet above the ground. Probably more for campfire cooking than for sitting in front of and enjoying...but we sat out for about an hour and had our after dinner tea and cookies.

We went inside at about 8:30 and I finished up the banking I had been working on earlier while Steve watched TV. The end to another day....
Posted by Dianne and Steve