It was cloudy and cool this morning...but there was a hint of blue sky showing on the horizon. There had been a sprinkle of rain through the night but nothing much. We enjoyed our usual slow start to the day...it was exercise morning, so after we had both done our routines, showered, had breakfast and cleaned up, it was just about noon.

What shall we do today? I voted for a bike ride...Steve a hike...I won. We ended up biking the Wasagaming Trail which is a 5.5 km ride one way. We have decided we need new bicycles...mountain bikes...not real fancy ones, but at least a bit of shock absorption would be nice. And bigger tires more conducive to trail riding would also be nice. 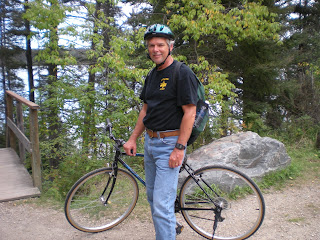 We figured we rode well over 11 kms today...if you take into consideration the missed turn-off due to someone taking the sign down...thanks buddy! The trail took us to the tip of the lake, by the Wishing Well that we had visited the other day. Once there, we sat in the grass on the edge of the lake and relaxed...the sun was definitely trying to come out. We watched the activity there for a bit and then it was time for the ride back. 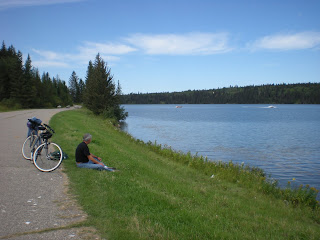 Once back in town, we treated ourselves to ice cream after such a long ride...kinda defeats the purpose, doesn`t it? Oh well... The sun had decided to show itself on and off by this time and it was nice sitting outside devouring our ice cream while people watching. Similar to Lake Waskesiu in Prince Albert National Park, there are a lot of small cabins/cottages here for all the many visitors the park receives.
When we had finished our ice cream, we made the short jaunt home and then relaxed outside in our chairs. I was having a hard time just relaxing so decided to walk back into town. We needed milk and besides, I still wanted to explore the shops a little more thoroughly. There are a lot of end of the season sales on right now...but I resisted and only bought a pair of earrings and a toe ring. I had a good walk into town, a good saunter around town...and then after picking up some milk, I had a good walk back home. Hopefully, that will make up...at least a bit...for the ice cream cone I had earlier!

Steve was busy taping up the air vents on the inside of the storage compartments on the truck. A design flaw made by the builders...after driving here in the rain last Monday, everything in the compartments was soaking wet. You would think common sense would dictate that this would happen...maybe we aren’t supposed to drive in rain????

I helped him finish off the taping...by cutting the tuck-tape into 9” lengths...and by the time we were finished it was well after 5:00 so we sat down to relax with a drink before dinner. Steve also got a campfire going and we sat chatting about our plans after we visit Winnipeg. We are going to head into Ontario, check out the ATV trails and maybe go see Niagara Falls. We’ll have to see how much we can do and see before we have to head south due to the weather.
Posted by Dianne and Steve