I was up at my usual time, just after 7:30...what? ...no wind? ...and is that actually blue sky? Yay! I did my usual...drank coffee and worked on my journal. I hadn’t even opened my laptop yesterday...I mustn’t have been well! 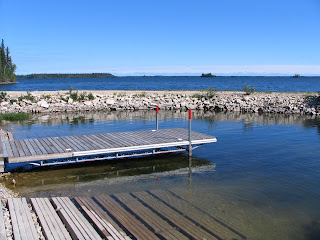 We had a relaxing morning...breakfast and then we went for a walk down to the boat launch area. It was so nice having the blue sky and sunshine...but it was still pretty windy and rough out on the lake. 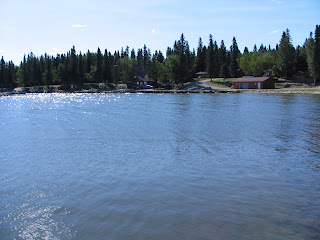 Shortly after 1:00 p.m. we all piled into the vehicles—Jon came with us in the truck; the rest in Kerry’s car—and headed to Weskesko Falls. It took about 45 minutes to the day use area. It is a beautiful area with suspension bridges over the river allowing for a great view of the falls in one direction and the lake in the other. After a nice leisurely walk through the trails, we got back into the vehicles and continued a few minutes further down the road to the lake and campground. We certainly have been impressed with the Manitoba Provincial Parks—they are very nice and well maintained. 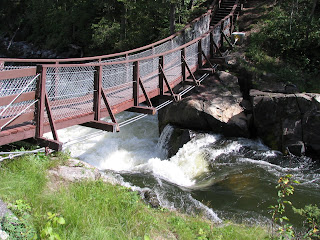 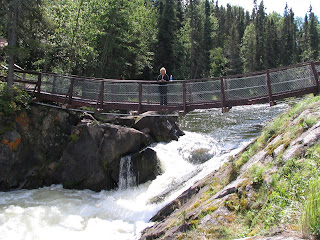 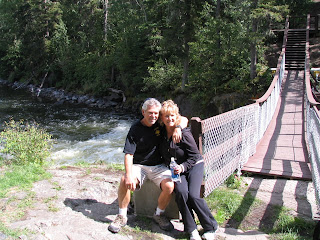 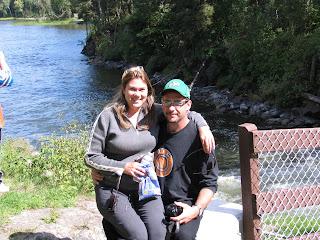 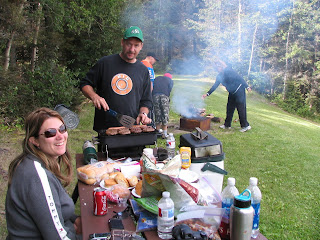 We parked at the boat launch and walked to the beach and playground area...a very nice grassy area with a lovely sandy beach. Dave had brought his hibachi to barbeque burgers and hotdogs, so the guys hauled the cooler to a nearby picnic table. He got everything all set up and realized he had forgotten a lighter to light the hibachi. Some campers out for a walk save us by going to their campsite and getting a lighter. The darn wind had picked up...so Jon had to run after her to ask for her lighter again...we’ll return it to their site when we are finished. We actually had to move to a more sheltered picnic table. We packed up and headed home at about 4:00 p.m. It had been a great afternoon and really nice seeing the area. 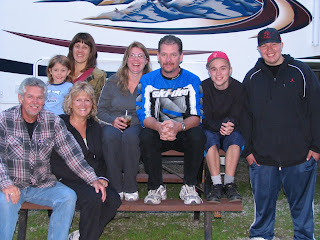 Once back at the trailer, Steve cleaned the awning and retracted it and started putting things away in preparation for leaving tomorrow. Dave and Kerry were leaving so there wasn’t any reason for us to stick around any longer. We would be heading south to Winnipeg to visit Angie’s family. We had lost cell and internet service (no Rogers service in northern Saskatchewan or Manitoba) a lot faster than I thought we would have once we left Saskatoon so I hadn’t had a chance to give Angie’s parents a heads-up on our ETA. We also hadn’t had any contact with the kids for a week now, so while we had been at Weskesko Lake, Kerry had let me use her cell to text Rob to ask for the Connelly’s phone number. He hadn’t responded by the time we were leaving, so Kerry suggested that I phone him while she still had cell service. Rob didn’t answer...I really didn’t expect him to because it would have been about 2:00 in BC and he would be at work...but it was nice just hearing his voice telling me to leave a message. 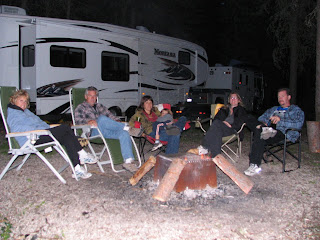 Our decision now was which route to take to Winnipeg. The route Dave takes when he goes south is highway 6 but there is nothing between Ponton (the start of hwy 6 which is about 1 ½ hours east of here) and Winnipeg and it is about a 9 hour drive. The other option is to go back through The Pas and take highway 10. It is further but there are a few Provincial Parks as well as Riding Mountain National Park on that route where we could stop. Since we are not in any hurry...hey, we are retired after all...we decided on the later route. Dave wanted to take us out fishing one last time tomorrow morning, so it was set...we would leave early tomorrow afternoon and head the short distance to Clearwater Lake Provincial Park.
Posted by Dianne and Steve