It rained through the night and was still raining when I got up this morning...but the weather forecast said that it was going to clear up for the afternoon. And sure enough, it stopped raining and the clouds started to break up by 10:00 or so and the sun started to come out.

It was lovely out by the time we hit the road at 11:00. We made our way out of Sault (Soo!!) Ste. Marie heading east on highway 17. It was an uneventful drive...stopping only once at a picnic site just on the outskirts of Iron Bridge where we ate the sandwiches I had packed. There was also a little farm market set up with the local ladies selling their jams, jellies, fresh made bread, cookies, pies...etc...along with some fresh produce as well. We bought a small (single serving) cherry pie and a date square...both of which served as dessert for us later that evening. 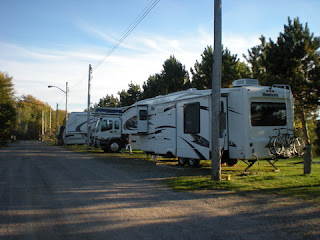 We arrived at Elliot Lake just after 2:00 p.m....that had been a nice easy drive. After stopping at the Visitor’s Centre, where we registered for a site, we drove further down the road to Westview Park (their municipal campground). It turned out to be road paralleling the highway with sites on one side overlooking the highway. Oh well, at least it’s not a main highway...it’s more like the main street that runs through town. The site (#12) we were given was the largest they had...and apparently was the tenting site so it had no sewer hook-up—only water and electrical. In order to fit, we would have to park the 5th wheel sideways. The people in site #11 would be leaving Monday so we could use the sewer hook-up which is right on the edge of the site once they left. Well, as it turns out, there would be no way, no matter how we situated the trailer in the site that we would have hose long enough to be able to make the sewer...no big deal...the washrooms and shower (which is free) was right across from us. We would just use them as much as possible to prevent our holding tanks from getting too full...particularly since we did not know how long we would be staying here. 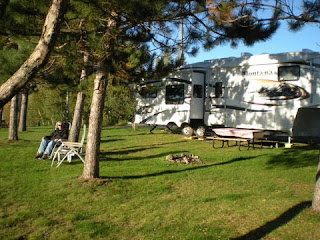 The city promotes itself as a centre for major outdoor activities...including the ideal location for your retirement. There are over 300 kms of ATV/snowmobile trails, tons of hiking trails and boasts 4000 lakes in the area for fishing. There are even ATV trails that allow you to drive right into a gas station to fuel up! We will be able to offload our quads right here in the campsite and ride the trails. We were also given a map that details all of the well-marked trails in the area.
As Steve was getting the satellite dish set up, a fellow on an ATV stopped as he was driving through the campground. Roly lives here in Elliot Lake and is retired. We had quite a long conversation with him about ATV’ing in the area. He tentatively offered to take us out on a ride Monday...he thinks he’s free that day...oh, these retired folks!! We enthusiastically took him up on his offer...it would be great going out with someone who knows the area. In addition to this, Steve also spoke to someone from the Elliot Lake ATV Club...they typically go for established rides every Saturday and Wednesday, so we will likely go for a ride with them on Wednesday. They have also been advertising a Fall Colours Ride next Saturday (September 25th)...that would be very cool! With the ATV rides, all the hiking trails and fishing opportunities, I think we will have no problem spending a good week or so here!
Posted by Dianne and Steve