I was up just after 7:30 this morning...to more wind! But...it didn’t seem to be raining as much—more like the wind blowing the rain off the trees. At least without the rain, we could get outside and that is exactly what we did. Steve built a campfire and we sat out in our chairs reading and of course, I can’t go too long without solving a Sudoku puzzle.

About mid afternoon we figured we should get off our duffs and go for a walk. We also needed to stop in at the office and pay for another few nights. The couple running the office are from Nanaimo. They have been full-time RV’ers for the past 18 years and like so many RV’ers, spend their winters down in the Yuma, Arizona area. The nightly fee here is $12.60...very reasonable! But there are no hook-ups which is fine with us. They do have water that you have to pump manually—I haven’t seen one of those old-fashioned pumps for years—and clean pit-toilets (aka outhouses). There is also a solar shower-house. With the lack of sunshine we have had the past couple of days, I don’t think that water would be hot.
Kerry’s friend Janet and her 4 year old son, Calum, arrived this afternoon. She lives in Red Deer, Alberta and decided to buy a small motorhome, rent out her house and travel for the summer. Her 14 year old daughter was visiting her father, so just she and Calum were here for a visit. She planned on carrying onto Thompson and visiting with Kerry for a week or so. They had started to take the same route over the gravel highway that we had taken from Nipawin to The Pas but had to turnaround due to flooding. She ended up backtracking then going the northern route through Flin Flon. I had considered that route but on our map, the road was indicated in grey which meant a gravel road but apparently it’s paved the whole way...sheesh... 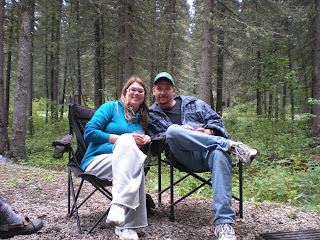 Happy Hour arrived and Kerry made us her favourite drink—Long Island Iced Tea. They are good...but deadly...as I was to find out. I should have known when after the first one, I had a buzz! After dinner, we continued around the campfire, chatting and having a great time. So great, that I didn’t want to go to bed. Apparently, I turned into a party animal and sat out by the campfire chatting with Dave and Kerry long after everyone else had gone to bed. It was 3:00 a.m. when I finally went to bed. 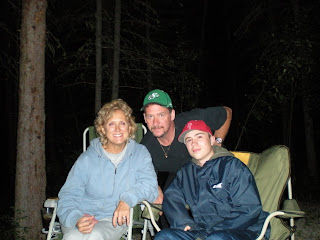 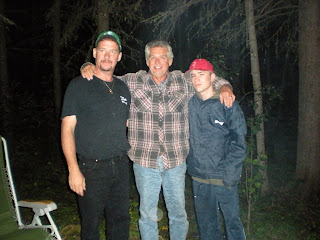