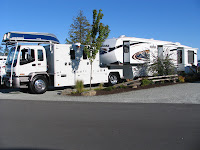 It was a beautiful Saturday morning as we left Oceanside RV Resort and headed to the ferry for the 8:00 a.m. sailing. 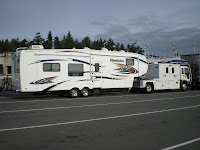 We had no problem finding Peace Arch RV Park as I led the way in the car with Steve following in the rig. Our initial impression of the park is good—nice office and check-in...we were assigned site B2 which was a bit awkward to get into due to our size. We managed to get set up but we “just” fit—not much space width wise and no picnic table...guess they figured there just wasn’t room for one anyway. Well, I have learned not only to inquire about the length but also to ask for a wide site so we have some room outside once all 4 slides are out. But the park looks nice with lots of big trees between each site...maybe that’s part of the problem—some trimming might be a good idea.

No time for exploring the park today, we set off to Chris’ place downtown as soon as we got all set up. It took about 40 minutes. Rob and Angie were staying with Chris for the weekend. Angie was at a conference for a few days up at Whistler and Rob had gone with her—why not take advantage of free hotel and transportation? They had decided to stop over in Vancouver on their way home since it was our last weekend and there were a bunch meeting for drinks and dinner Saturday night. The main thing to get done this afternoon was to get the car transferred over to Chris and get insurance for him and cancel our insurance. We thought since we had our insurance with Coast Capital in Sidney that if we went to another Coast Capital Branch, it would be easy for us to cancel our insurance while Chris bought his. After checking on the internet for the nearest branch, we headed to the one on West Georgia only to find that one was not open Saturdays—the nearest open branch was in Yaletown so away we went. Once we found that branch, we learned that it did not sell insurance so onto another branch; this one on West Broadway. This was not going to be easy...we then learned that our car did not have the Air Care certification required by all vehicles in Vancouver. So the fellow gave us directions to the nearest Air Care Centre so we could get the test done.  The test took all of 2 minutes and cost $45 but we now had the certificate in our hot little hands! Of course by that time, it was well after 3pm and all Coast Capital branches are closed. Okay, fine, we’ll just find any auto plan seller and get the car transferred over and get Chris set up...we’ll just have to cancel our Coast Capital portion later on sometime. 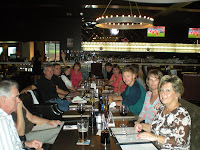 By the time we had finished all that, we were ready for an early dinner—we were meeting everyone at 5:00 p.m. at Earls on Lougheed Hwy and Boundary in Burnaby. Thirteen gathered to wish us well—Bev, Cheryl, Grant, Nicole, Glenna, Cameron, Esther (Little E) Oaks, (brother) Don, Rhonda, Chris, Rob, Angie and even Grant Simpson popped in (he had been over on business). 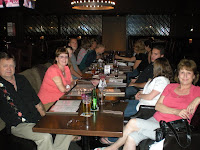 We had a few drinks, dinner and some good conversations and then Chris drove us back out to the RV park. Since our car only holds 4, Rob and Angie took the skytrain...an adventure for Angie—her first time. Chris was a little anxious about finding his own way home now that he is driving but he had no problem (I called him later to make sure he made it...yeah, I’m a Mom)
Posted by Dianne and Steve