After a really crappy sleep last night, I finally decided that I might just as well get up and put the coffee on...it was 5:00 a.m.!!  We were going into Kelowna today...Dennis was taking Dunkin’ in for grooming (Clip’n Dales....cute name!) and Steve was going into the clinic to have the cyst under his arm removed. 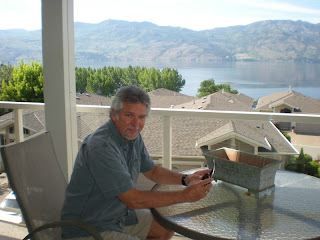 We left just before 8:00 for the drive up to Kelowna.  It was a beautiful morning for a drive along the Skaha and Okanagan Lakes.  We dropped Dunkin’ off for his 9:00 appointment and since Steve didn’t have to be at the clinic until 10:20, we went over to Dennis and Suzanne’s condo.  Steve and I sat out on the deck admiring the view for the last time...the condo has sold and Dennis and Suzanne have been busy packing up.
Steve’s surgery was quick...he was out in about 20 minutes.  He has two “mattress type” stitches that will have to be removed in 10 days, so we will stop at a walk-in clinic somewhere along the way.  He also has to avoid heavy lifting during that time, so that should be interesting.
After picking up Dunkin’ at the groomers, we went to Lordco where Dennis and Steve went in to take a look at Sirius satellite radios while Dunkin’ and I took a walk over to some grass and then waited in the car.  Before long, the guys were back with a new satellite radio in hand.
After Steve got his haircut, we went to Original Joe’s for lunch (we had dropped Dunkin’ off at the condo so that he wouldn’t have to wait in a very hot car).  It was about 1:00 by this time and we were all starving!  All three of us had their halibut burger special which was very good...but very big.  Absolutely stuffed, we left the restaurant, picked up Dunkin’ and were on our way back to the lake.
It was a very windy afternoon out at the lake while Dennis helped us load the bikes onto the bike rack...something we had meant to do yesterday after loading the boat, but totally forgot to do.  Then it was time for Steve to pull out his new satellite radio and he ... but mostly Dennis spent the rest of the afternoon installing it in the truck. Dennis has one so was familiar with it and Steve’s left arm was useless for climbing around the truck....so thanks for the help Dennis.
We sat inside out of the wind (and with the air conditioner on) visiting for a bit before Dennis and Dunkin’ headed back to their trailer.  We had a light bite to eat, watched TV and then headed to bed.
It’s hard to believe we’ve been here a week already...and are heading out tomorrow...

Here is a picture of Dunkin' with his new haircut... 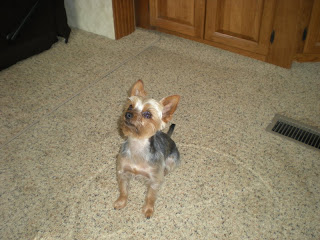 Posted by Dianne and Steve at 2:31 PM