I woke up bright and early this morning feeling much better after a good night’s sleep.  Although a little cool in the trailer first thing, the sun was shining and the forecast was for a beautiful day today...about time! 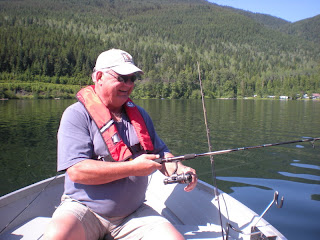 The plan for today...well...it was fishing for Steve and sitting in my lounge chair reading for me.  Our neighbour, Fleming, had an inflatable boat that had sprung a leak, so Steve invited him to go out fishing in our boat today.  They headed out at 8:00...with hats and suntan lotion.
I read yesterday’s newspaper (The Vancouver Province) that Fleming had given me, ate a bowl of cereal and then thought I should get cleaned up so I could get outside into that beautiful sunshine!
I was sitting outside reading when Marilyn came over for a chat.  She too was enjoying the morning reading while the guys were out fishing.  We commented that fishing must be good...they had been out there for 3 hours now.  A few minutes later, in come Steve and Fleming.  Apparently fishing hadn’t been very good...what a change from the other day! 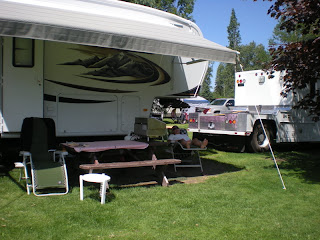 After lunch, I went back to reading my book in the sunshine while Steve relaxed in his lounge chair.  He had a couple of hours of rest and relaxation before deciding it was time to go back out onto the lake and try fishing again.  Fleming also wanted to try his luck again...so off they went.
While they were out fishing, I continued reading and also thought I would put on a load of laundry.  Since we were leaving tomorrow, I might as well take advantage of the laundry facilities here.
Steve and Fleming came back in around 3:30.  Steve said they just weren’t able to get any fish up to the boat.  He caught around 6 fish but after a jump and splash...they were off.
Now it was time to load the boat back onto to the truck...so I drove the truck over to the boat launch area while Steve took the boat around.  We got everything loaded back onto (and into) the truck and on our way back to our site, stopped at Bob and Carol’s and invited them over for cocktails. 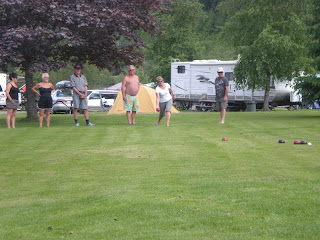 There was a bacchii-ball game going on in the grassy field in front of us.  We were sitting in the shade watching it when Bob and Carol arrived.  Bob had driven his side-by-side over and we were giving him a bad time about that...but he had a good excuse...his bar was in the back, so he wouldn’t have to walk home to freshen their drinks. 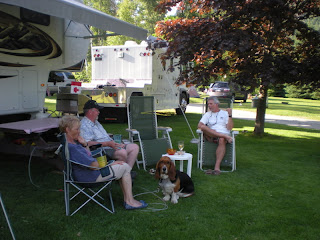 We had a good visit with them and before we knew it, it was after 8:00!  Gee...guess we should get dinner going!  We exchanged contact information and after hugs and handshakes, they headed home and I went inside to get dinner started.  Steve started putting things away outside...getting prepared to leave tomorrow.
Posted by Dianne and Steve at 8:24 PM