We were moving on to another spot today but we weren’t really sure where we would end up.  On our way up to this area, we had driven through the Slocan Valley, passing by the town of Slocan as well as Silverton and New Denver...all small communities nestled on the shores of Slocan Lake.  We weren’t sure if we would find any campgrounds with sites large enough for us...all we knew from the literature we had, is that there is one small Provincial Park just north of New Denver but by the description, it didn’t sound like we would fit into any of the sites.

So our plan is to head back that way and watch for any private or municipal campgrounds along the way.  If we didn’t find anything that would accommodate us along Slocan Lake, then we would continue to the Nelson area.  There was a big Provincial Park (Kokanee Creek) just 19 kms east of there that we were pretty sure would have sites large enough for us...and hopefully there would be some available.


Our first stop was New Denver and as were entering the community, a fellow on a motorcycle going in the opposite direction was waving at us as we passed...Steve said “Hey, that’s Dennis!”  It was my brother who was on his annual bike trip with a group of guys from Kelowna.  Wow, what are the chances of that?!! 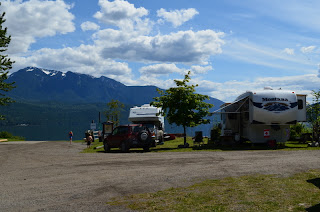 We stopped at the visitor’s centre and were told that their municipal campground had large sites and they gave us directions to the park.  We managed to get a spot right on the lakefront...sweet!  Mind you, there isn’t much of an “it” factor other than the fact we have a site backing onto to the lake.  There are no hook-ups at the lakefront sites, but they do have showers ($1 for 4 minutes). Steve was pleased to see that they were using coin meters made by Pacific Controls Ltd...his former employer. Mel and his wife, Gayle who manage the park said they have WiFi...awesome! 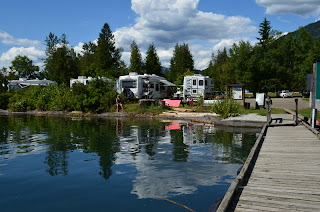 After filling up with water we headed over to our site.  Our 5th wheel just fits into the spot with the truck parked just across the road.  It was just after 12 noon and we were both hungry so the first thing I did after we got unhitched and put the sliders out was to make lunch.  It was turning out to be a very nice day...as we sat at the picnic table under the shade of the awning eating our sandwiches. 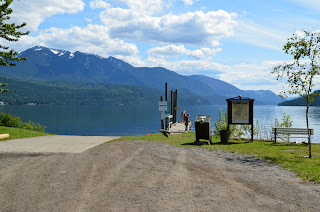 I finished getting the inside all unpacked while Steve set up the satellite dish.  It took him a long time as he chatted with the fellow in a camper on one side of us and with a couple that had just arrived on the other side.  He was still working on levelling off the tripod and getting the cables out when I was finished inside so I thought I would walk over and pay and find out about the so-called WiFi....my laptop didn’t pick up the signal.  Gayle said that the modem was at the bathhouse and that it was a little finicky but to keep trying.   Sheesh!!
As it turned out, I ended up taking my iPod over to the bathhouse and the only place that I could pick up a signal was on the far-side of the building.  Well, I managed to at least download email and check Facebook.  I also sent a note to Chris to wish him luck with his new job...tomorrow is his first day.
We relaxed in the 28C/82F shade for a bit and then invited our neighbours over to join us for happy hour.  Robert, (and Judith...who was out shopping) is on one side in the truck and camper (from Qualicum Beach) and Murray and Donna are on the other side in a 5th wheel...they are from Sicamous.   We had a great couple of hours chatting and then it was time for dinner...it was close to 6:30 by this time. 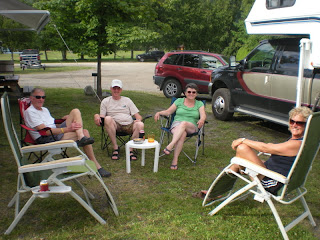 After dinner, we walked over to the pay phone to call Rob and Angie...it had been quite a while since we had talked to them.  Unfortunately, the pay phone which said it only took cards...didn’t want to accept my Visa card.  Apparently others had had the same problem too.  Oh well, we tried...we’ll just have to try another pay phone tomorrow when we go into town.
When we got back, Robert was preparing a campfire and invited us over to join them.  Later on, Murray and Donna joined the circle around the campfire and we enjoyed a lovely evening...dodging campfire smoke.
Posted by Dianne and Steve at 3:48 PM