Well, today is our last day here at McDonald Creek...the week has gone quickly!  But we’ve seen a lot of the area, enjoyed some beautiful hot sunny days...and some not-so-good fishing...and we are ready to move on. 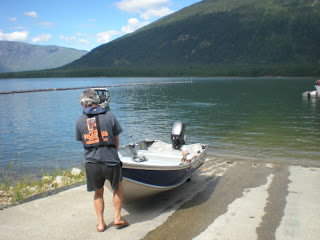 After breakfast, it was time to take the boat out of the water, so I drove the truck down to the boat launch while Steve took the boat around.  We had to wait a few minutes while another fellow was launching his boat.  Once he was out of the way, I continued down to the water where Steve was waiting.  For the most part we had the boat launch to ourselves which is good because our set-up is much more involved than just backing a boat trailer into the water, getting your boat onto it, and then driving out.  However, Steve was just securing the boat motor in the compartment when a pick-up truck with a boat on top showed up...he had a boat-loader similar to ours.  Well, he’s just going to have to wait until we are finished...it tough though, we hated feeling rushed.
Once back at our campsite, Steve checked the air pressure on all of the tires and ended up pulling out the hose to fill some of the trailer tires.  The one we just had fixed was a little low but holding its pressure. He also re torqued the lug nuts on it. I sat back in my chair with my Sudoku book and enjoyed the sunshine.
After Steve finished up with the tires, he decided to join me in the sunshine...but first he had to put on suntan lotion.  As soon as he had done all that and was ready to sit and relax in the sun...guess what?...the clouds had rolled in!  The wind had also come up and it was getting quite chilly out.  So instead of enjoying the sunshine, we sat out all bundled up in our sweats...I even ended up going in and getting my small blanket.
Other than going for a walk around the campground (to warm up), we really didn’t do much for the rest of the day.  A little sun came out later in the afternoon so we took our chairs down to the beach area to enjoy the on again/off again sun.  The camp host brought around some firewood for us ($6 for a good stack) and Steve got a fire going.  We sat by the fire and had dinner (I made some chicken fajitas)...the wind had died down and it was really a pleasant evening.
We got a "last night at this spot" photo... 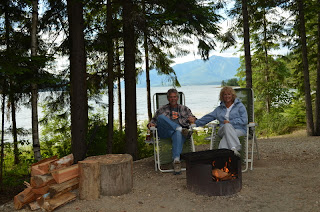 At 7:45, fifteen minutes before the deadline of having to turn it off, the generator ran out of fuel.  Other than about a half hour this morning, we have only been running the generator each evening for two hours...yes, we have become one of those hated generator users but we do try to minimize the use of it.  Had we had a site with more exposure to the sunshine, we probably wouldn’t have had to use it at all...just let the solar panels take care of charging the batteries.
I was helping Steve put the generator away when a couple on bicycles stopped by...he was quite intrigued by our truck.  I think it was also a good excuse to stop and ask us if we were leaving tomorrow because they didn’t like the site they were in.  After chatting with them for a bit...they had just been on an Alaska Cruise and were now spending a week here before heading back home to southern Saskatchewan...we headed inside...it was 9pm already!
Time for a little TV...and then bed....
Posted by Dianne and Steve at 3:38 PM