It was going to be a hot one today!  After our morning coffee(s) and exercises, Steve had his shower while I cooked breakfast.  We were finishing up the dishes when Dennis and Dunkin’ came over to say good morning.  He was going golfing with Kurt and Ann this morning. 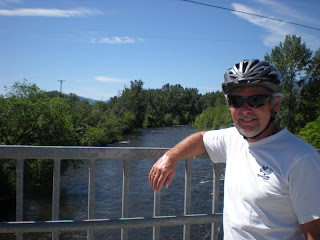 I finally had my shower and was ready for a bike ride.  We were getting ready to leave when Dennis, Kurt and Ann headed out for their golf game...it was just before 11:00.  After applying lots of suntan lotion, we too were off.  We decided to go the opposite direction this time...going left down Tuc-El-Nuit Lake towards the highway, then taking the bike path along the river into Oliver and around back to the lake.  We road 15.5 kms today, stopping only a couple of times for water and to take pictures. 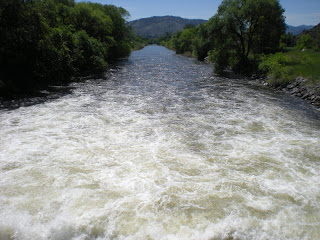 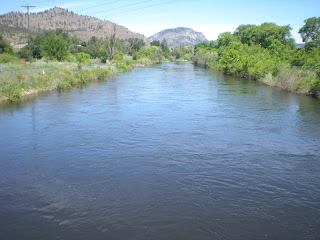 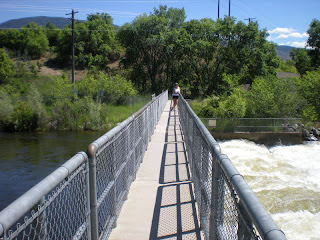 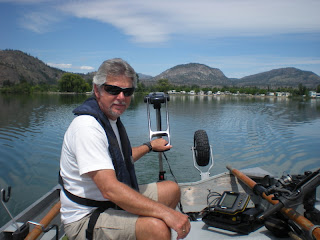 Once back, we relaxed in the shade for a bit before heading out in the boat.  We were going to load the boat back onto the truck today so we thought we would have one last outing in it before packing it up.  It was hotter than a firecracker out there!  Especially when there was no breeze.  We did a little fishing...but it wasn’t Steve’s day out there today!  First of all, he forgot his tackle box (which had our fishing licenses in it); then he spilt his can of coke...twice; then he got tangled in some kind of buoy someone had anchored out in the middle of the lake; and then his fishing line broke when he was bringing it in from the downrigger...luckily the rest of the line with the hook was still attached to the other end of the downrigger! 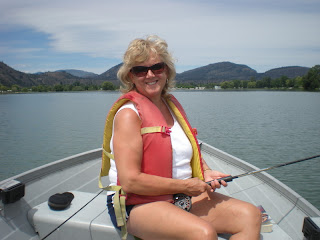 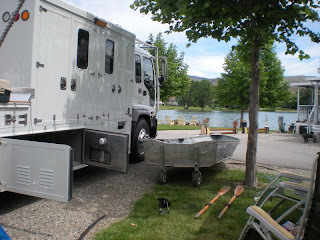 We were out on the lake for about an hour before we decided to head in.  As usual, no fish had found our fishing lures attractive enough to bite.  But they continued to tease us by jumping all around the boat!
We had the boat loaded on the truck and Steve was just finishing packing up all the boat accessories when the golfers returned home.  Sounds like they had a good game...well a fun time, anyway.
Since we are going to Kelowna tomorrow and then leaving on Thursday, I wanted to get all the laundry done up.  The laundry room here is very convenient...just on the other side of where the truck is parked (it’s actually another site but they are allowing us to park in it while they are not busy...Dennis’ SUV is parked at one end and our truck at the other end). 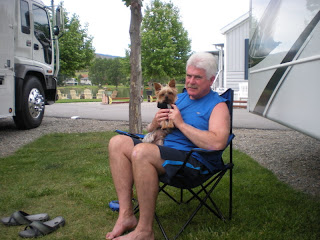 The three of us sat outside in the shade chatting and playing with Dunkin’ before heading inside for dinner.  After cleaning up the dishes, I prepared the coffee for tomorrow morning and while I thought I was setting the coffeemaker to come on in the morning, I guess I pressed the wrong button because next thing we knew, we had fresh brewed coffee.  So we all had a cup...a big mistake.  I thought maybe the added Bailey’s might counteract the caffeine...no such luck!
Posted by Dianne and Steve at 2:20 PM