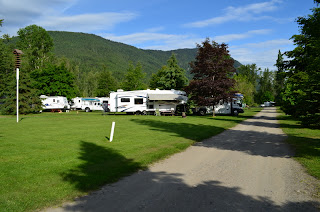 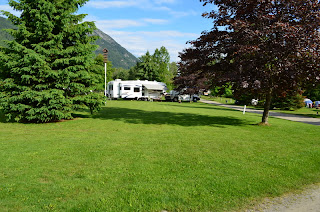 Unfortunately, either the trailer didn’t like it or the 30 amp power is wonky here because it blew the tripper...sheesh.  So, on go the shoes and outside I go to reset the breaker on the power post but there is no breaker there...only the plug in.    By this time Steve was just finishing in the shower so after he got dressed, he went out to confirm that there was no breaker on the post...nope...so he walked down to the office.  Well, the office didn’t open until 8:00...so he sat outside in the sunshine enjoying the beautiful morning with his coffee for an hour. [The pictures above are of our campsite...Steve took while waiting for the office to open]


That was a good start to the day...oh well.  We finally found out where the breaker was...which is a good thing because it tripped again...there is something about 30amp that our trailer just doesn’t like sometimes. We have a voltage regulator that we plug into the power post that protects our system that bumps the voltage up or down by 10% depending on the voltage input. It has been shutting down our power several times every day and the indicator lights show low voltage at our site...intermittently.
We thought we would drive the 16 kms into Nakusp today...it was after 10:00 by the time I was ready to go (after taking my hair dryer over to the bath house to use the electrical outlet in there). 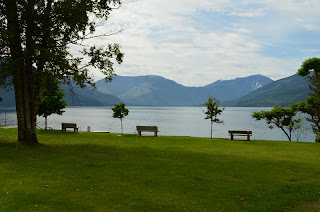 Nakusp is a pretty little town on the shores of the Upper Arrow Lake.  After checking out the Municipal Campground (too small and treed for us to fit), we parked across the street from the beach and went and took a look...very nice!  The area is getting ready for the big Nakup Music Festival which is happening in a couple of weeks...some big names are going to be here...The Doobie Brothers, Kevin Costner & Modern West, Spirit of the West, Canned Heat, Soul Asylum...just to name a few. We might go if we are still in the area. 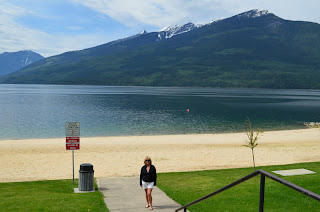 After checking out the beach and taking some pictures...that’s Saddle Mountain in the background...we decided to drive back to the main street, park and take a walk through town. 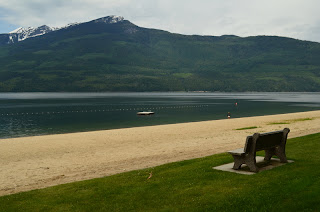 After walking down the first block, we noticed a sign that said “To the beach and boardwalk”...okay, let’s check that out.  There is lovely walkway all along the waterfront so we walked all the way to the end (to the marina), then up the hill back to the main street and back to the truck. 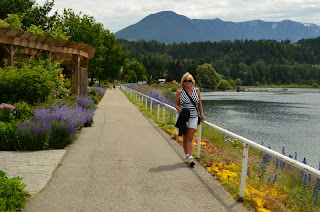 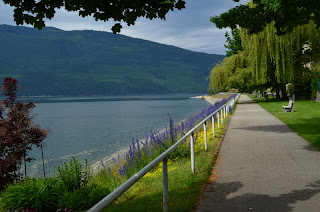 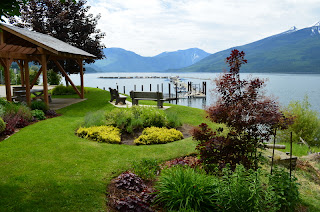 A picture of Saddle Mountain with part of the marina in the foreground... 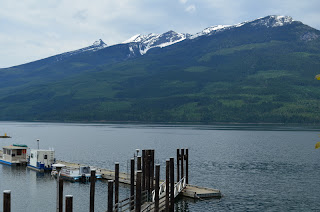 I wanted to pick up some fresh veggies and fruit at the Overwaite and we also needed to make a stop at the liquor store but before doing that we thought we would take a drive south down to McDonald Creek Provincial Park.  It’s only about 15 kms along the east shore of the lake and I wanted to check it out to see if, by chance, we could fit into any of the sites.
We stopped for some pictures along the way... 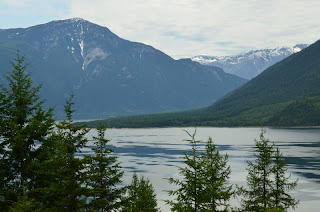 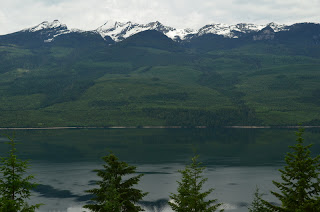 We were very impressed!  A really nice campground with 31 of the 46 campsites right on the lake with direct access to the beach...nice!  Sites 2 to 21 are also non-reservable which means they are first-come-first serve sites and you can stay in them up to 2 weeks without worrying about getting booted out because someone has reserved it.  There are also a number of them that we figured we would be able to get into.  On the way out we stopped and spoke with the camp host.  She said that starting next week most of the reservable sites are all booked up for the rest of the summer with perhaps a night here and there available...we asked mainly because there is one site (#40) that we really liked but of course, it is a reservable site so that would likely be a no-go for any length of time.  I don’t have internet so I can’t even look it up.  Anyway, I think we are going to move there this Sunday and take a chance on getting a vacant non-reservable site...she said that is a good day because there is usually a lot of change over that day.  Even if we can’t get into anything Sunday, they have a huge overflow spot that we could definitely get into.
On the way back into Nakusp, Steve suggested we stop at a pub that we had spotted along the main street and have a bite to eat.  Sounds good...so we sat out on the patio of the Lions Pub, had a beer and split a beef-dip...it would have been nicer had it been sunnier but then again, it was plenty warm and would probably have been too hot had the sun actually come out!


After a stop at the liquor store and picking up a few groceries, we headed back to Summit Lake.  We drove right to the boat launch so we could off-load the boat and be all ready for fishing...whenever Steve decided to go out.  Unfortunately, the wind had really come up, so he wasn’t able to get out on the lake.  Instead, he spent the rest of the afternoon changing the fishing line on his rods while I did 3 loads of laundry.  There is only one washer and one dryer but it is better than no washer or dryer!
This is a picture looking towards the lake from our campsite... 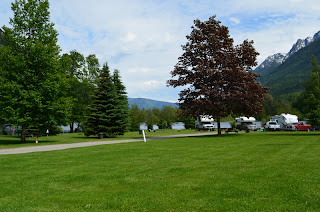 By late in the afternoon the wind had really become quite chilly so we decided to head inside.  There were also “sheepskin” clouds forming which, according to Steve, means a change in the weather...he couldn’t have been more right!


p.s....Happy Birthday, Jim!  We couldn’t email you because we have no internet!!  Hope you had a good one!
Posted by Dianne and Steve at 2:22 PM