We were all packed up and ready to go just before 9:30 this morning.  After hugs and handshakes we said goodbye to Dennis, Dunkin’ and Tuc El Nuit Lake. 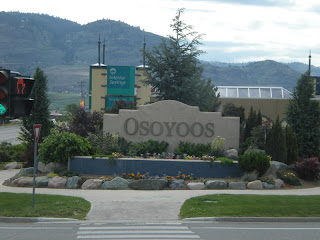 We headed south on highway 97 through Oliver towards Osoyoos. Once in Osoyoos, we took highway 3 east...and then started the climb.  Holy Cats!  What a climb up into the mountains that was! And the view of Osoyoos and the valley is just incredible!  I managed to get a couple of pictures before my camera battery decided it was “exhausted”...yes, I forgot to charge it...sheesh!

Here are some pictures of Osoyoos as we headed up the mountain... 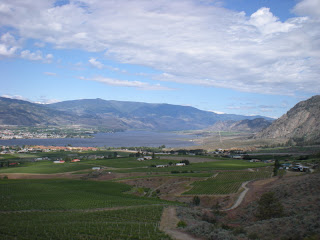 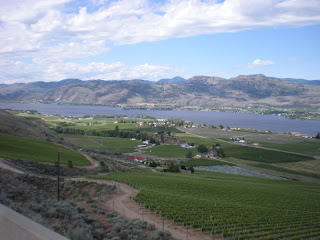 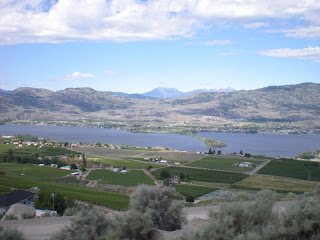 It is such a beautiful drive through the mountains...everything is so green and lush.  We stopped for a stretch-break in Greenwood...apparently it is the smallest city in Canada.  A very cool little place...too bad my camera wasn’t working!
We continued on to Grand Forks where we pulled into a mall parking lot on the edge of town and brought out our lunch.  The sun was out while we ate our sandwiches and stretched our legs.  After about 20 minutes or so, we were back on the road continuing east towards Castlegar.
Once we reached Castlegar, we took the turnoff to highway 22 south to Trail.  We arrived at Walmart, on the south side of Trail, at about 2:15. Don was in a meeting and wouldn’t be able to meet us until after 4:00, so we had plenty of time to do a little grocery shopping.  We met Don Frew and his wife, Linda, at the ATVBC Poker Ride in Princeton last July.  Don is an avid hunter (he used to guide) and when he heard that Steve wanted to try an Elk hunt, he invited him to the West Kootenays.  Since we had decided to spend the summer exploring the Kootenays, Steve contacted him.  It would give Steve a chance to take a look at the area before hunting season in October.
Not knowing where Don had planned to take us, we hadn’t yet filled up with water.  We knew that we would be dry-camping (boondocking) but there was a huge climb out of Trail, if we were continuing east and we didn’t want to hull full water tanks up it if we didn’t have to.  As it turned out, we would be continuing along highway 22, south along the river.  But Don said the easiest place for us to fill up with water would be to follow him up the hill into Montrose to his place.  So up the hill we went. 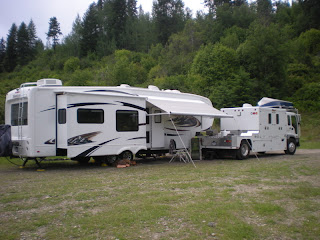 Then back down once fully loaded...and following Don in his truck, we headed south along the river to Seven Mile Dam Road where we turned east and headed into the Pend d’Orielle Valley.  The spot Don had picked for us was a big open area just past the dam.  It is where they park their trucks and off-load their quads to go riding.  It isn’t pretty, but it’s a large area with plenty of room for us and we can off-load our ATV’s and ride right from there.  There is a really nice campground on the river (run by BC Hydro) down the road a bit but the road in is very narrow, steep and windy and all the sites but one (already occupied) wouldn’t be large enough for us...drats!  Unfortunately, there was no cell service here in the mountains...and of course, that also meant no internet either!
After taking a look at the area, Steve was walking past the trailer to get back in the truck when he noticed a hissing sound.  Great...the trailer’s back tire had picked up something sharp...now the tire was going flat!  He managed to manoeuvre the trailer into the spot where we were going to set up camp. Because of Steve’s recent surgery Don offered to put the plug in the tire.Thanks Don! Hopefully, that would hold until we got it to a tire shop to have it fixed.


Don sat and chatted with us for a bit and then headed home.  We had made arrangements to go riding at 9:00 tomorrow morning...we are really looking forward to it!

Posted by Dianne and Steve at 3:14 PM