Well, we found out today that we got fooled into thinking that we had lost an hour yesterday due to a time zone change...not so!  We were going by the time on the TV...cable from Cranbrook...where it is Mountain Time.  I checked and the time zone change is just on the west side of Cranbrook...we’re getting close but not quite there yet.  Talk about confusing the whole body clock as we turn our clocks back an hour today!


When Steve got up this morning, he suggested that we stay another night here.  The weather forecast is better for tomorrow and besides, it would give me a chance to get the laundry all done up.  Might as well take advantage of the facilities they have here.
Steve watched TV while I puttered around cleaning things up in the trailer and making trips back and forth to the laundry.  Basically, it was a pretty relaxing morning.
Just after 12 noon, we decided to go for a walk.  There weren’t any hiking trails around here so we walked along the highway to a strip mall where there was an Overwaitea Store, Liquor Store, Dollar Store, restaurant and a few other shops.  I picked up a couple of groceries (carried them in the backpack) while Steve went in search of a place to get his hair cut.  The sign at the entrance said there was one...he just had to figure out where it was.  I asked the clerk at Overwaitea when paying for my groceries where it was and went to meet him.
As it turned out it was in a lower part of the complex “around back”...and the only shop that had a business in it out of about a dozen empty stores. Before leaving, we met Albert, former president of the Creston ATV Club.  The salon is a family-owned business and Albert, his wife and son (who cut Steve’s hair) own “Hair’s Where It’s At”. Albert said to contact him if we come back this way and they will take us out quadding. Sweet! Nothing like having a tour guide to their favourite places when you don’t know the area. 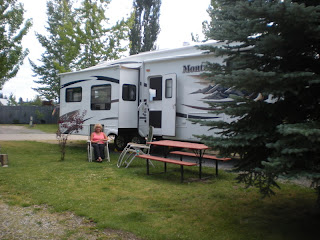 We really didn’t do much for the rest of the afternoon...Steve flushed the black water tank then we tried sitting outside but it started to rain so we scrambled inside. The sun came back out...and the process was repeated...it’s amazing how quickly it starts to rain sometimes...no warning of a few drops...just an immediate downpour!
I was on the computer and Skype talking to the tech fellow at BC Backroads Maps trying to figure out the problems we are having with the recent update to the maps.  He ended up sending us a new “Unlock Key” but that didn’t work either so we’ll have to see how that all plays out once we hear back from him.
We had a nice chat via Skype with Steve’s uncle and aunt (Gord and Esther)in Edmonton as well as my brother and sister-in-law (Dennis and Suzanne)...had dinner...watched TV...and that was it for the day.  We are heading to Moyie Lake Provincial Park tomorrow...I hope we able to get a spot we can fit into...
Posted by Dianne and Steve