It was exercise morning today, so after our usual start to the day, we got to it. After we were done, I went out for a 45 minute, 3 mile walk (I finally got my tracker out) while Steve had his shower.

We had a pretty laid back day. It was back to clear, blue skies...but wind was a bit of an issue, making it unpleasant to sit outside, although tolerable as long as you were out of the wind. Steve sat out reading for awhile but for the most part I stayed inside.

We are planning a potluck and campfire for New Year's Eve so after Earl dropped a couple boxes of firewood off, Steve decided to also go into Quartzsite and pick up some. While he was there, he filled up our water jugs...and also bought me a new flag for the whip on my quad (Merry Christmas, honey!) 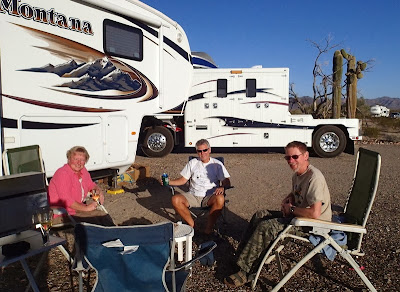 About 3:30, we got a phone call from Ruth and Dale. They are full timers from Auburn, WA and fellow RV-Dreamers. They are also staying at La Posa South and wanted to drop by for a visit. We met them a year ago last September at the  RV-Dreams Fall Rally in Harrisburg, Oregon. The wind had quieted down somewhat so we sat outside with a cocktail and had a great visit. They are here for another week so we plan on getting together for dinner one night this week.

And that was pretty much our day...tomorrow we plan on driving to Lake Havasu City to pick up Steve's ATV and do a little shopping.