It was another cold start to the day...and windy! But yes, the sun is shining...which is nice! Today we were invited to go geocaching with Earl, Allison, Bob and Sue to a location about 30 miles south of here. We hummed and hawed about it and then decided to pass on this outing...we had some errands to run in Quartzsite, so thought we would take care of them today. With their quads loaded on their trucks, we watched as the two couples head out for their day. 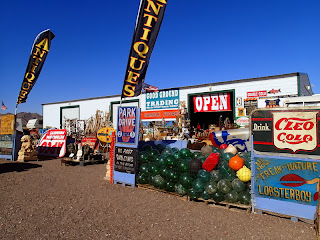 It was well after 11:00 by the time we went into Quartzsite...our first stop was at Quartzsite Flags since I needed a new flag for the whip on my quad. There are lots of spots to get flags but Quartzsite Flags has the one I want...it has both the US and Canada flag together on one flag. Unfortunately, it was closed but we wandered around checking out 3 big vendor buildings full of "stuff". After finishing in that area, we went to another store, again full of "stuff" where Steve found the sewer attachment he was looking for to connect to Earl's macerator pump. We continued down the street checking out more shops...a lot of the shops aren't open yet. It's still pretty quiet in Quartzsite but I'm sure that's going to change come January. 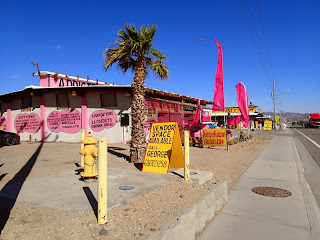 After we had finished our wandering around, we went to The Pit Stop and filled our propane tanks and then filled a couple of gallon jugs with fresh water. In Arizona there are kiosks where you can fill containers with drinking water for 25 cents/gallon.

Back home, we settled inside out of the wind for the rest of the afternoon and evening. This cool weather is forecast to stick around for a bit...the sunshine is really nice, but we sure wish that wind would die down! The wind gusts of 30/mph really rock the trailer!