It was exercise morning...so just before 8:30 we got started. Afterwards, Steve had his shower while I headed out on my 45 minute powerwalk. It was a beautiful morning!

While I was in the shower, Steve made another line for our clothesline. I'm going to do laundry today and he decided that the 2 lines up right now wouldn't be enough. So after dishes were done, we went outside and moved one of the poles over, adding the third line between the 2 poles, making a big triangle.

After that was done, we walked over to Earl and Allison's for a chat. We have to drop off Steve's ATV at AZ West in Lake Havasu for repair and since Earl had mentioned that they might be interested in going, we thought we would talk to them about it. We made arrangements to go Tuesday. 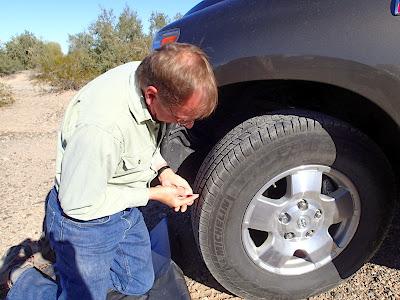 Earl picked up a nail in his truck tire so he and Steve set out to plug the hole using the tire repair kit from his ATV. After pulling the nail out, a rasp has to be inserted into the hole making it bigger...seems kinda bizarre to me! Then the plug goes in...they had a tough time getting it in, but finally managed it.

After that was done, Steve and I loaded the dirty laundry into the truck and headed to the laundromat Today, I am just going to use the washing machines and then bring the wet laundry back home and hang it all on our clothesline. While the laundry was in the machines, Steve went to the Dollar General to pick up some clothes pegs (called "pins" down here).

About an hour later, we were home...I started hanging our clothes on the line while Steve borrowed Earl's sani-station trailer. We didn't need to dump our tanks but we did need fresh water... 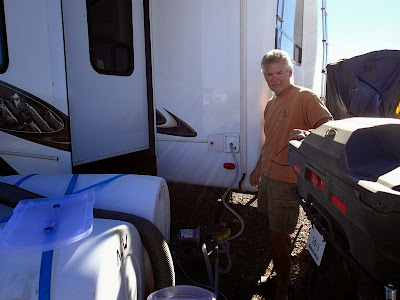 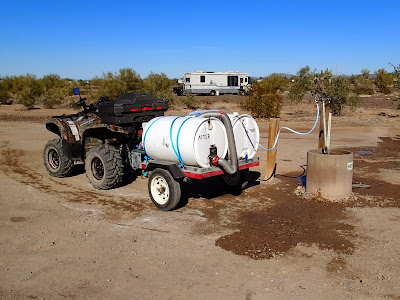 I love this...one tank for fresh water...and one for sewer waste..."before" and "after"...Earl, you are too funny! The front of the tanks say "new" and "used". I think this was for Steve's benefit as they weren't labeled the other day... 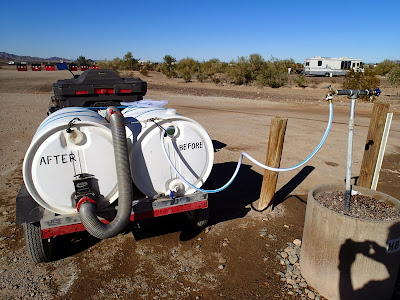 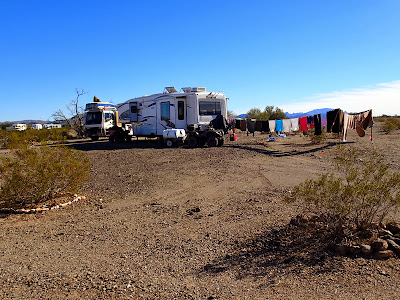 The clothesline is full...good thing Steve added the extra line! It's amazing how quickly the clothes dry. With humidity only at about 20%, along with the breeze, it didn't take long...even the jeans and towels! 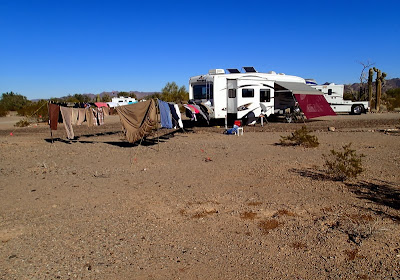 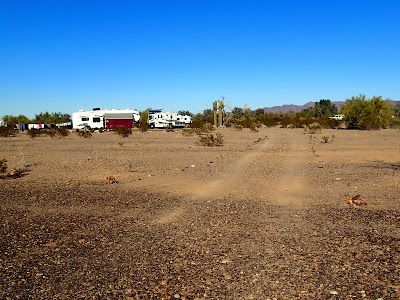 Earl and Allison's driveway across the road from us... 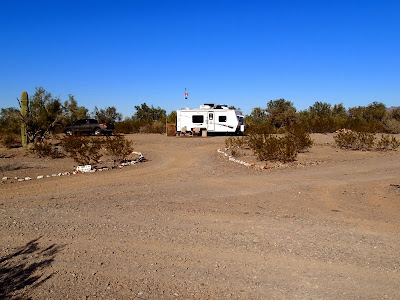 Another picture of our yard...love our Saguaro cactus and dead tree! 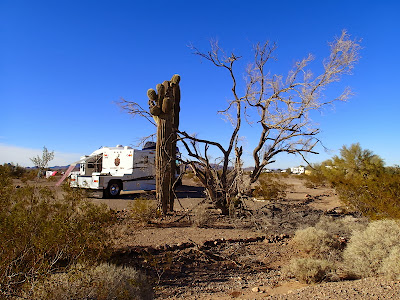 After our work was done, we sat outside and watched the sun go down behind the mountain. As usual, it got quite chilly out so we retreated inside.

After dinner, we settled in for another night of TV...the 3 hour season finale of Survivor is on! Yes, we are die-hard Survivor fans...having watched every season!
Posted by Dianne and Steve