We were packed up and ready to go just before 10:30 this morning. After stopping at the office to pay for our electricity use...$24.57 for 4 nights...we were on our way. It was a beautiful day...just the way I like it for a travel day! 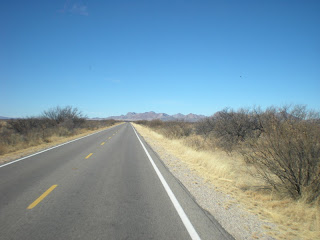 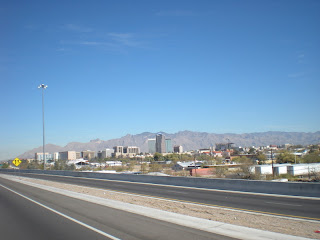 We continued west on Interstate 10 to Tucson (we later learned that we drove passed the Safeway where the female senator was shot in the head and six others were killed) and then headed north on Highway 79 through Florence (a “prison” town...we passed three prisons on our drive through the city) and then west on highway 60 to Apache Junction. We were going to visit Garth and Donna, the couple that we had met back home when we lived at Oceanside RV Park. This would be our second visit with them since leaving Victoria. 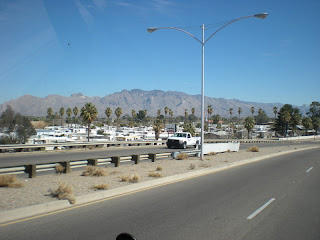 It was after 2:00 when we pulled into a strip-mall parking lot...where Garth had suggested we go and then call him. He wanted to meet us and take us to the park they were in before we drove the truck and 5th wheel in...so we could check out the site to ensure we were okay with it.

Soon Garth and Donna came walking across the lot and after big hugs and hellos, we all walked back to check out the spot Garth had picked for us. This is actually a mobile home park that is full of park-models but there are a few RV sites. Our site was 3 down from Garth and Donna and would work out fine. Steve and Garth walked back to get the rig and soon Steve was manoeuvring back into the site with the help of Garth while I sat visiting with Donna. It took a big of wiggling to get in...there is always a tree or some other obstruction in the way...but he managed. 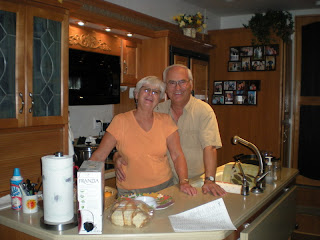 After we got all set up, we went over to Garth and Donna’s for a visit and dinner. It is good to see them again.
Posted by Dianne and Steve at 6:59 AM