Well, that was a better sleep...and no sore back for Steve this morning...whew! I think our bodies are adjusting to the comfort of a new mattress. Steve was even up before me this morning...mind you, I wasn’t far behind. It was only 6:25, after all!

We had a very lazy morning...other than doing our exercises, that is. It was another cloudy, windy, rainy day...not the kind of day that motivates you to get moving. After breakfast, Steve settled in to watch some of “his” shows on TV while I decided to set up our new printer. All went smoothly getting the wireless connection working...yay!

The big chore for the afternoon was to go do laundry...our most favourite thing in the whole world! Yuck! But it has to be done. So I braved the rain and wind to walk over to the camp host to ask where the closest Laundromat was. Chuck and his wife were cleaning one of the cabins...such nice people. The Laundromat is in Newburg, just 5 or 6 miles away. While talking with them, Chuck asked if we had been to the Visitors Center yet. No we haven’t...but by the sound of it, we had better check it out.

Back at the trailer, I gathered and sorted all the laundry and Steve helped load it into the truck...and off we went; to spend the next two hours. One nice thing is that they had large front-loading machines...they say they hold 2 large loads...so we had 3 loads. 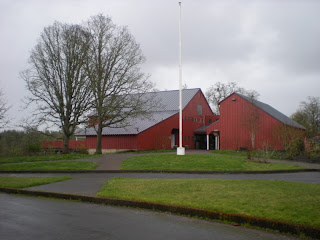 We were done just after 2:00 and headed back to the park...but before going to our site, we stopped at the Visitors Center. They have a very good display on the history of the area. It was an area under control by the Hudson Bay Co and was explored and settled by mostly French Canadian fur traders. In later years the fur trade died out so farming took over in the rich soils of the Williamette River area and many Americans started to settle here and the town site of Champoeg was born. The HBC wasn’t interested in settlements and reluctantly gave up the territory after the area locals voted for government control so they would have law and order eventually becoming a state. 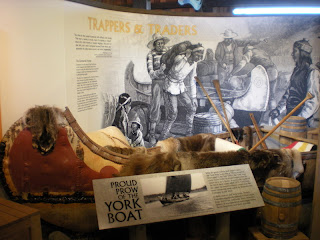 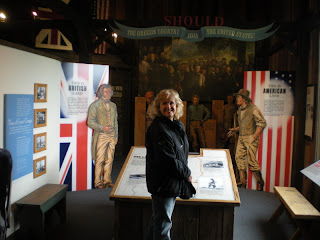 While we were in the Center, it poured...and poured out...and it continued to rain as we left and headed the short distance to our campsite. This beautiful pheasant greeted us... 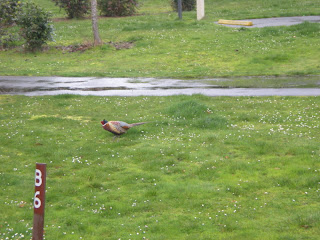 Once inside, I put the laundry away while Steve started his research of fabrication places to get the hitch installed and then started to check out bike stores...we’ll get our Christmas presents yet!

Hopefully, we will have better luck tomorrow getting it all done...oh by the way, we have decided to stay another couple of days...or so. We plan on crossing into BC on Thursday....gee...why do I feel like our vacation is ending???