We arrived at Sleep Country USA in Sherwood, Oregon at about 2 minutes before 10:00 a.m....and considering they open at 10:00, what perfect timing (particularly since we had no idea what time they opened). We spent the next hour or so laying on various beds...and getting totally confused about which had what feature. But, Brittney, our very nice and knowledgeable young sales woman was excellent. We finally decided on the mattress...Sealy Posturepedic Simple Pleasures—it has a combination of individually wrapped titanium coils as well as memory form...complete with a mattress cover and a new set of sheets. I also got a Tempurpedic ‘Cloud’ pillow. Hopefully it will work for me...I have yet to find a pillow I really like. All will be delivered tomorrow to our trailer at the campground...and they will also take away our old mattress.

Our next stop was Best Buy. We started by replacing our Epson printer/scanner. It was less than a year old and hardly used but unfortunately when there was a paper jam in it, I pulled the paper out and it hasn’t worked since. It would cost more to have it looked at (let alone fixed) than a brand new one so we left it for recycling and ended up buying an HP this time.

The next thing Steve wanted to look into was replacing the Samsung Home Theatre Receiver in the trailer with Sony to go with the TV. The Samsung wasn’t working properly...we noticed awhile ago after smelling a burnt electrical smell that two of our expensive HDMI cables had been squished by the TV when it retracts behind the fireplace. Well, the day had started off good but it was now taking a turn for the worse. The receiver in the trailer is a low-profile one (about 3 inches high)...and the only way of buying one like that is by buying the whole Home Theatre System...speakers and all! The only “stand-alone” receivers are huge...at least 6 inches high! Now isn’t that ludicrous? Steve is not a happy camper! We’ll try a Sony store and see what they say.

Next was a stereo system for the truck...so over to the car audio section. Steve got an estimate...we’ll think about it...but he didn’t have a “warm fuzzy” feeling about what was being offered, so it is unlikely we will have it done there. He’s going to research specialized local car audio installers.

By this time, it was time to find someplace for lunch. We also wanted to go to a Sony Store and Serena found an address in Portland...and there happened to be a Red Lobster Restaurant along the way, so that’s where we went. The restaurant was very nice looking...we loved the decor...but the food wasn’t that great which was disappointing. We probably should have waited and gone for dinner sometime...the dinner entrées, although pricey (as seafood usually is) sounded wonderful. Steve loved his side-salad but we both found the breaded shrimp very salty.

After lunch we went across the street to a Sears store that we had noticed on our way in. Steve wanted to check out air compressors. It would make topping up the air in the trailer tires easier than trying to get into the air-hoses at stations (particularly with the trailer). All of the gas stations we have been to charge for air and their pressures aren’t high enough. Hmmm....not much luck there as the ones they had were bigger then he thought they would be...he’ll do a little more research before deciding what size he wanted. 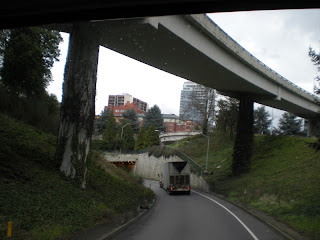 Now...this is where the afternoon got very interesting. We decided to believe Serena and follow her directions to a Sony store in Portland...however, once we arrived, it was not a Sony store after all but just an electronics store. And it was on a fairly narrow, busy street with no parking...so much for that! But all was not lost, Steve still wanted some answers regarding the air-bag installation in the front-end of the truck, and there happened to be another DSU Peterbilt & GMC Truck Center not too far away. So that is where we headed....oh my...what an adventure we are on!
Once at DSU, we learned that air-bag installation would be considered an “after-market” installation and they don’t do that...try Oregon Spring. Well, Steve had already called them this morning and they said that they didn’t do that. Since it didn’t appear that Oregon Spring was that far away, we punched the address into Serena and off we went. Sheesh...where the heck is she taking us!

Calm down, Dianne....we found Oregon Spring with no problem and Steve spent quite some time in the office talking to the fellow. Then he came out with a fellow who spent some time under the front-end of the truck checking out our springs...and then they went back into the office. When Steve finally returned to the truck to get the weigh scale printout from when we were in Pennsylvania, he explained what he had found out. Apparently air-bags in the front-end are not recommended in our type of truck...and he finally explained to Steve why. Well, rather than a curt “no we don’t have air-bags” for that truck on the phone call this morning, why hadn’t he bothered to explain why. Apparently they have had many unhappy customers in the past that have gone this route and have also had a few Peterbilt semi drivers come in to have the factory installed air bags removed because of poor stability. Our front axle weighed in was at 11,200 lbs so...bottom line is that they don’t remove a few leafs from our 14,600 lb. springs...but new 12,000 lb (different style) ones need to replace them...and they would need to be shipped from Texas! Okay...that is not going to get done this trip! Steve is happy that he finally found out more information about it...but...unhappy that parts would have to be ordered in! We will get a price when we get back to B.C. however it may be worth waiting until we return next fall to save the tax.

It was now 4:30 and after doing some research on the laptop (good thing we had brought it along) we discovered there was a “Sony Style” Store in Portland...and it happened to be in the mall where we had been at Sears!! So back we went. We thought that maybe Sony would be able to sell only the low-profile receiver rather than the whole system...but...no...can’t be done!! Unbelievable...hmmm...now what?? By the way, we can’t even purchase a replacement Samsung receiver either...they too, only come with speakers as well! All of the 5 speakers are already wired into the ceiling...we only need the receiver!!!! Sheesh!!

Okay...let’s go home! That was a challenge as well...battling rush hour traffic. It was after 6pm by the time we got home...totally exhausted from our day! It was soup and sandwich (salad for me) for dinner tonight.
Posted by Dianne and Steve at 9:11 AM