There is a pancake breakfast at the park this morning at 9:00. So we thought that we would get all packed up before going for breakfast...that meant no dilly-dallying over coffee this morning. We were all finished by 8:45 when Gerry called from Yuma. He gave us directions to their place. We would drive directly to their place and determine from there where we would stay. They have a long driveway but by the sound of it, there is a steep entrance to it that we’d have problems with. So it was unlikely we would be able to stay there but there are plenty of RV parks in the area. 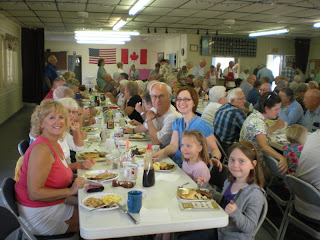 We arrived at the park clubhouse shortly after 9:00. It was full...thankfully Donna had taken our plates and reserved spots for us at their table. We met Lana and her two young daughters, Erin and Annalise (sorry, if I didn’t get the names right, Donna). Unfortunately, we missed Lana’s husband...he didn’t come for breakfast and had gone out exploring by the time we were finished. We had a great breakfast of coffee, pancakes, eggs and sausages...not bad for $3.00!

After breakfast, we went back to hook-up the trailer...it was time to hit the road! After hugs and handshakes, we were off. Thank-you, Donna and Garth, for your hospitality...we had a great visit, as usual!

We had another great travel day...blue sky and lots of sunshine! It was about a 3 ½ hour drive to Doreen and Gerry’s place in the foothills. They have been family friends of Steve’s parents since 1966 when they were neighbours in Courtenay...and we haven’t seen them for almost 5 years! Pretty bad considering they live in Mill Bay (a short drive up island from Victoria)...but we are now really looking forward to seeing them!

We stopped for lunch at a rest stop... 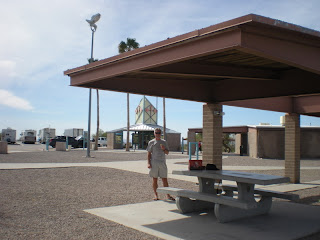 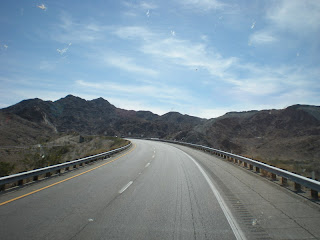 It was around 2:30 when we pulled up in front of their place. They have rented a big park-model on a lot in the foothills of Yuma. It’s a very interesting area...you can buy lots here and do whatever you want with it. Some have homes built on them, while others have park-models or use the lots strictly as RV lots. So along the streets there is a mixture of homes, park-models and motorhomes/5th-wheels/trailers...all have beautiful adobe brick fences built around them...very cool!

After big hugs and hellos...and also meeting Gerry’s cousin, Shirley-Ann visiting from Calgary, we determined that no, we would not be able to fit into their driveway. So Gerry suggested that he drive us to take a look at an RV park that friends of theirs had stayed at. Fortuna de Oro RV Resort is just a short drive back towards the highway. He drove us through the park and after deciding it would work for us, we stopped at the office to book a site. Interesting...they do not take “plastic”, only cash or cheques...good thing they had an ATM! We chose site 1028, a back-in site in this huge park where there is a combination of park-models and RV’s. There is also a restaurant, golf course, pool, clubhouse...the whole works! At $34.00/night plus tax, it was a little pricy but not outrageous.

Doreen had invited us to join them at a going away party that evening but it was already close to 4:00 and we still had to get ourselves set up at the RV Park. So we declined the offer, making arrangements for breakfast the next morning instead...then we were off to Fortuna de Oro RV Resort.

We provided the entertainment for a growing audience as Steve manoeuvred the 5th wheel back into our site. The folks next door were having a going away party for a couple on the other side of us that were leaving the next day. Thankfully people were just starting to arrive as Steve backed in. I had forgotten the radios inside the trailer, so we had to back in using hand signals...with me running from side to side. As usual, there was a tree...one fairly small tree...that is placed in a stupid spot! After a couple of goes at it, Steve managed to get the trailer nice and close to the cement pad.

The crowd was growing next door...they were having way too much fun as we were busy getting set up. They had invited us over when we had gotten all set up. We were just finishing up when Jim came over again to make sure we were going to come over...yup, we’ll be right there! We got our chairs out and joined the circle...there is no way I can remember all their names but there must have been about 8 or 9 couples there. All of them were from Canada...mostly BC. Tom and Mary, the couple hosting the party, are from Penticton. Jim and Leslie, the couple leaving tomorrow, are from Langford. Some of the other couples were no longer staying in the park, having instead rented lots privately. 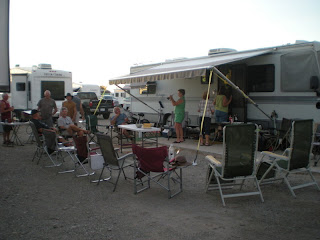 We had a great time meeting and chatting with them all. Before long, they were firing up the barbeques...everyone had brought salads and desserts along with whatever they were meat they were going to barbeque. They invited us to join in so Steve did up some burgers and we helped ourselves to all the delicious salads. Someone had baked a bundt cake that had rum soaked raisins in it...OMG...it was so good!

It was just before 9:00 p.m. when the party broke up...”party hearty” then to bed early! We had really enjoyed our initiation into the RV Park!
Posted by Dianne and Steve at 10:07 AM