As usual, I was awake bright and early this morning. It was 5:30 when I decided to put the coffee on and then crawl back into bed for 15 minutes while it brewed. I can hardly wait to get that new mattress we have been talking about for quite awhile now...I think that is why I’m awake so early. After a cup of coffee, I took a quick shower and was out enjoying another cup when Steve decided to get up.

The wind seemed to be rocking the trailer pretty good this morning so I checked the forecast...sure enough, there was a wind advisory for this area, so we had better get on our way lickity-split this morning. There is no advisory for Bakersfield, about an hour west of here so we should be fine as we carry-on west to the I-5 and then north. We plan on driving to a place called Patterson which is south of Sacramento...there is another Passport America RV park there...might as well take advantage of our membership. I did check out a few State Parks in the area but they do not seem to have sites large enough for us...I also understand from one of our travelling friends, Eric, that California has really priced themselves out of market at $35-$50 with no hook-ups! Poor California is really suffering...one rest area we stopped at yesterday was in terrible condition and many are closed. There were workers there cleaning it but everything was in need some of major repairs....and some stretches of highway were just terrible! Steve kept switching lanes trying to avoid pot-holes. We are also not looking forward to having to fuel up in California. We understand that California has some of the highest fuel taxes, making diesel well over $4.00/gallon. 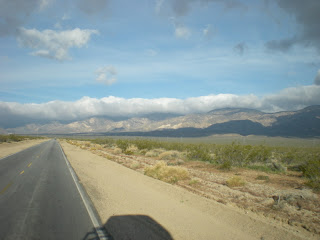 We were on the road just before 8:30 this morning...there were some dark ominous clouds over the mountains as we headed west. We drove through the Tehachapi Mountains...very beautiful, even on a cloudy day. Again the countryside is changing...we are now moving into some lush green mountains... 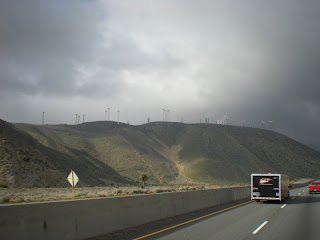 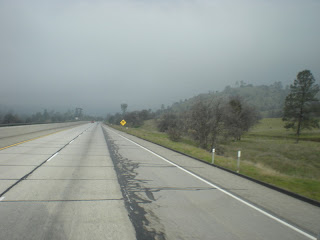 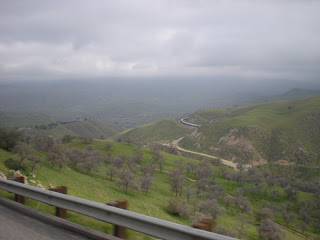 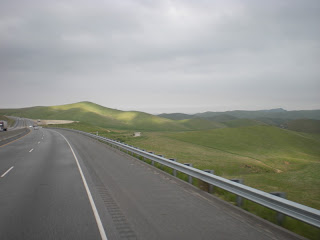 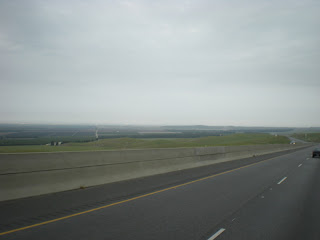 And then...it was flat...flat... as we left the mountains and headed towards Bakersfield. Miles and miles...acres upon acres of farmland. And that was really the way it was as we continued along highway 58 to I-5. Once we hit the interstate, it was really pretty boring...flat and straight. I mentioned the state of California’s highways earlier...well...there are sure some bad stretches along the I-5...particularly under overpasses or over bridges. 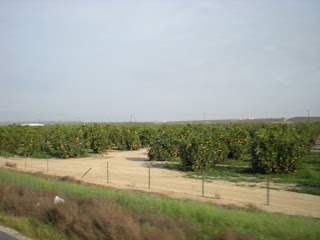 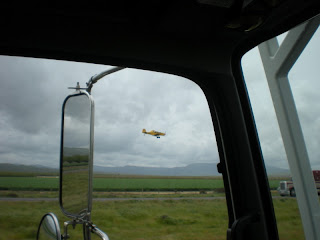 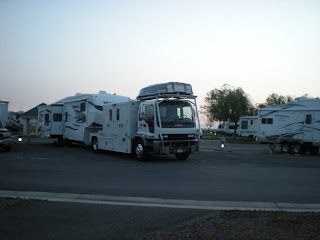 We continued north, arriving at Kit Fox RV Park in Patterson, CA shortly after 2:00 p.m. It is a nice easily accessible Passport America Park. We were given site 107, a long (fairly narrow) pull-through site so we would not have to unhitch. At $22/night with full hook-ups including cable, it was reasonable...thank goodness for our PA membership. Once we got all set up, I decided to head down to the laundry and do put a couple of loads on...it was either that or buy new undies...haha! 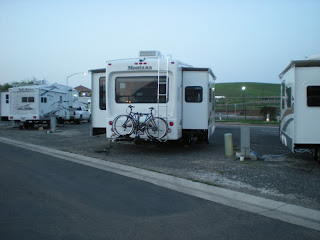 We ended the day nicely, though...we went out for drinks and dinner. Just down the street is an area of restaurants and shops...so after the laundry was done, we walked down to see what we could find. We stopped in a little Mexican Bar and Restaurant for a drink and then continued onto an Italian Restaurant for dinner. It was Wednesday...all you can eat pasta night...so for $7.95 each, we both had pasta which included soup or salad and bread. Of course, we left stuffed.

Well, we are going to continue north tomorrow...sheesh...3 straight days of travel! But we want to get into Oregon and give ourselves plenty of time to get all our shopping done and the work done on the truck before we have to be back in BC.
Posted by Dianne and Steve at 7:19 AM