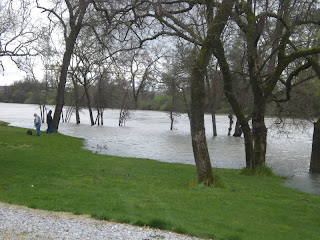 We were both woken at 4:15 this morning by the wind rocking the trailer...and the rain continuing to pour down. What a storm! I finally gave up trying to get back to sleep and got up at 5:00 to put the coffee on and check the weather reports on the laptop. The gusts of wind were probably the worst we have ever experienced in the trailer...it would really shake and the awnings over the sliders were really taking a beating! Hopefully, they make it through this storm without being damaged. Even though the satellite dish was anchored with 18” spikes it was blown over...and that picnic table we have been watching as the river rises...well, it is totally under water now. By the way, it is a concrete table...so, no it did not float away!
"Normally" there is grass to the other side of those trees (in the picture below) and then apparently a steep river bank down to the water... 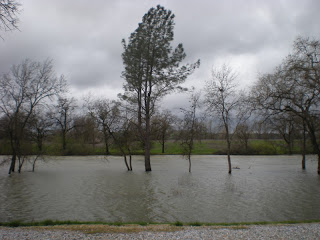 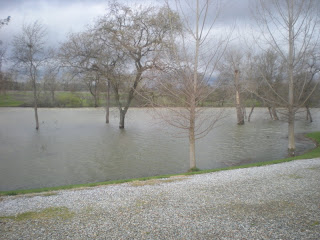 Steve decided to get out of bed around 6:30 and since we had no satellite signal, we watched some recorded programs for a couple of hours. Then we decided it was time to get our butts in gear...exercise day! After showers and breakfast, I walked up to the office to pay for another night while Steve dismantled the satellite dish. We plan on leaving tomorrow (fingers crossed!) and we can watch cable for the rest of the day and night.

While Steve was puttering around getting things ready to leave tomorrow, I was on the laptop monitoring the road conditions through Mt. Shasta. They finally took the “chains required” notification off at around noon but there was still a high wind advisory. We have until noon tomorrow to check-out of the RV Park so hopefully all warnings will be lifted by then.

After a walk around the park, we went back inside to get out of the wind. One thing we noticed on our walk was that the river was starting to go down...the picnic tabletop was now exposed and there was a line of debris along the riverbank marking the high waterline.

We spent the next couple of hours reading and then decided to turn the TV on. It was still fairly windy out with occasional gusts rocking the trailer...but not nearly as bad as in the early hours this morning. I learned on the weather service website that gusts had reached 60 mph.

Well...we are tired of these weather imposed “down days” and are anxious to get going tomorrow. I hope the weather co-operates!
Posted by Dianne and Steve at 6:57 AM