We were both up bright and early this morning. Steve was anxious to get on the internet and research car audio installers. I had found one while surfing the web last night called Outrageous Audio and after spending considerable time on their site, Steve was very impressed. They do a lot of custom work on semi trucks, marine, aircraft, ATV’s and high end vehicles. That’s where we are headed today. 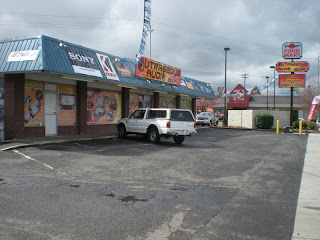 Well, after being up early, we did our exercises, had showers and breakfast and were on the road by 9:00 a.m.! Of course, Outrageous Audio was on the eastern side of Portland in an area called Greshen...over an hour away. We arrived around 10:15 and as we entered their store, I was amazed by the inventory stacked everywhere...truly a “guys paradise”! Dustin was very good helping Steve pick out all the components without trying to oversell him and after tallying it all up, Steve gave him the go-ahead...they could actually install it today! We certainly hadn’t expected that! Our only stipulation was that they had to be finished by 3:00 (or shortly after) because we had to be back home in time for Sleep Country to deliver our new bed. They had called yesterday afternoon and given us a delivery time of between 4:45 and 6:45.
Steve selected a Kenwood CD receiver with an IPOD/Memory Stick USB port...Blue Tooth that will answer our cell phone and also receives Satellite and HD radio as well as Pandora Internet radio...two 4” dash speakers...two Boston 6 x 9 three-way speakers...a 10” Boston subwoofer and amp. Steve said he was going to start wearing a baseball cap sideways...get a set of white framed sunglasses... baggy jeans that slide half way down his butt and some funky running shoes! 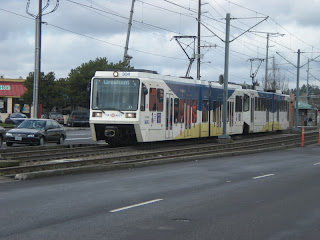 The only fault with this company is that they do not have any type of waiting room for customers to sit comfortably while having work done on their vehicle. Dustin had suggested we take “The Max” (Portland’s version of light rapid transit) to an area of stores and shops not too far away. So we got adventurous and decided to go for it. After figuring out which ticket to purchase from the machine, we stood waiting for the train. It wasn’t long before it came and just a short ride to the area that we figured was the area Dustin had described. It would have been nice had it been a mall where we could go inside to escape the weather...but it was an area of newer upscale townhouses and shops with larger stores intermingled. As it was just before noon, we found a Red Robin Restaurant and headed in for lunch. 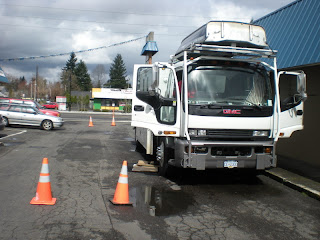 After lunch, we wandered around a bit more and then headed to catch train back to Outrageous Audio. Steve wanted to get back to talk to the installer about ensuring that the wires to the battery would be long enough when the truck cab was tilted. As it turned out, Ed (the installer) had thought of that and the installation was progressing well...he’d probably be another hour or so. Well, as I said earlier, they have no waiting room, so we spent the next 2 hours standing and pacing around their premises...both inside and outside. 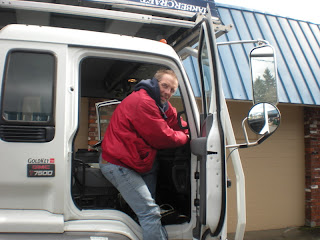 When they were finished, Steve got a quick overview of the various features and then we had to get going...it was 3:15. Wow!!!! What a difference in sound quality from the factory installed 4” dash speakers!

Serena said it would only take 55 minutes to get home but we weren’t sure if heavy traffic was going to back things up and add to our travel time...and we didn’t want to take any chances.

As it was, traffic was pretty smooth going and we were home at 4:15, giving us plenty of time to get ready for Sleep Country. I cleared the bedroom and we moved the old mattress out in preparation. Jason (the delivery truck driver) called at 5:15 to say they were on their way and would be here in about 30 minutes. All went smoothly and they were in with the new mattress and out with the old one in no time flat. It was the first time they had ever made a delivery to a campground!

Well, you have never seen two people more excited about having a new mattress! It seemed twice as high as the old one! I got it all made up and the bedroom put back together. We could hardly wait for bedtime!