This morning we took the ATV’s to the car wash, unloaded them, drove them into the wash bay and power-sprayed them. They needed a cleaning in preparation for their first servicing. After dropping them off at Kelowna Yamaha for their servicing tomorrow, we arrived home just after 1pm. We had a quiet afternoon spending a good portion of it inside our air-conditioned trailer because it was a hot one out there! We received an email from Uncle Gord asking if, by chance, we would be in Edmonton by August 2nd since the family was gathering to celebrate his birthday. If not, then they would arrange another gathering when we were there. Steve responded that we would be there so I thought I had better try reserving a site at the local RV Park, Rainbow Valley. Unfortunately the one spot they had that would be big enough for us was already taken...hmmm...time to start researching some other locations. 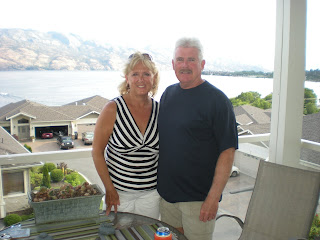 Dennis arrived just after 4pm and after a beer here, we headed to their place. When Suzanne got home from work, we all went down to the pool to cool off before heading out to a local pub for “Wings Night”. We enjoyed a healthy dinner of wings (4 different seasonings) and onion rings...yum! We then drove downtown to the Kelowna lakefront to join the hundreds of tourists walking along the parkway. 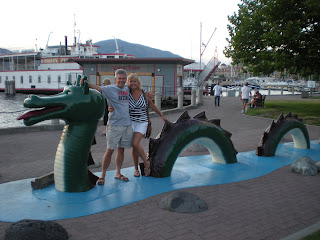 It was a beautiful evening and just lovely there. We wandered along until we came across the casino...surprise, surprise! Suzanne is notorious for her luck at casinos. I plugged my $20 into a slot machine, played it for a bit before moving on to try some others. I was up about $16 at one point but of course continued plugging away until I was back down to just over $20 when I decided to cash in...but...while waiting and watching Dennis at a slot, I decided to plug my $20 into the slot next to him. The whole $20 was gone in minutes! Oh well, the main thing is that I didn’t bring out more $$.

We said our goodnights at about 10:30...the end to another great day.
Posted by Dianne and Steve at 7:55 AM