We left Fort Langley at 10:45 a.m. on a beautiful sunny day. Perfect for travelling. We made our first stop at a FlyingJ centre in Chilliwack to top off the diesel tanks. Our first time fuelling up with all the truckers! As we past Hope and turned onto Hwy 3 we encountered our first major climb into the mountains and we were very happy with "Buster’s" performance—it was slow (45kms/hr) and steady but he made it just fine without overheating or any other problems...and we are quite a heavy load! There is a long hill down into Princeton and the truck did well with that too...it’s scary seeing the signs advising of the "runaway" exits—hoping that we won’t ever need to use one of them! 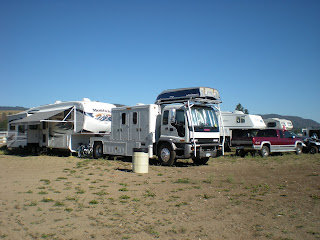 We arrived at the Princeton Fairgrounds just after 4pm after filling up with water at the Husky station in Princeton. Zan, Doug and a few others from the Cowichan Valley ATV club had already arrived. Apparently there were going to be quite a few from our club attending and it would be nice to have us all together which is really a good idea, however, it meant that we would be camping in the dustbowl again. Oh well...it is nice to all be together. While I got everything set up inside, Steve drove into Princeton to fill up the gas containers in preparation for some riding tomorrow. After a little socializing, dinner and more socializing, we headed to bed.
Posted by Dianne and Steve