We were waiting at the door when Camping World opened up this morning. After a discussion with the technician and then with Paul, they would take care of the battery issue...hmmm...not convinced they know what they are doing but we are stuck with them...good thing we purchased the extended warranty to cover all this work. They would also take a look at the water leak problem. We waited around for quite awhile and then at 11:30 I suggested we go for lunch. As we were getting in the truck, a car drives by in front of us...and who is waving at us but our old neighbour from Fadalgo Bay, Eric. A neighbour of his had been going to Camping World so he tagged along to see if he could find a cover for his bikes. We went to the Olive Garden Restaurant...truly a great place, just like the TV ads! The service is friendly and professional and we had a great lunch. I had the unlimited soup, salad and bread sticks...which was great but the "unlimited" was wasted on me. Steve had pizza that came with unlimited soup or salad...he chose Minestrone soup. Once finished there, we topped up with diesel and headed back to Camping World.


Our Montana was back in the camping lot...yay...they are finished and we can leave! We got hooked up and then headed into the store to finish the paperwork and get the keys. When we saw Paul, he said he had good news and bad news...the good news was that they had installed a switch to turnoff the solar system when we are using full hook-ups...the bad news was that they found the source of the water. Apparently the caulking around the shower stall is coming off and that was where the water is coming from. All the caulking needed to be stripped and the whole shower stall re-sealed...and that involved pre-approval from Keystone. They suggested we go back to our dealer as it is a warranty issue. Hmmmm...well no showers until we get that resolved...we’ll deal with it back in BC. 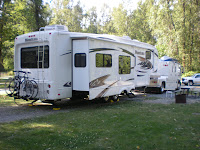 So at 2pm we headed north to the border. After taking a wrong exit off the I5 and going through Blaine, we arrived at the truck border. We were virtually through in a few minutes...you just never know what to expect. We arrived at Fort Camping at Brae Island in Fort Langley shortly before 4pm. This is a lovely regional park. After getting set up, we sat outside and made a couple of phone calls...it is nice to be back in BC where our cell phone works. We were only supposed to be down in the US for a week so I didn’t bother with getting cell coverage...next time we go down, I will have a proper cell plan! 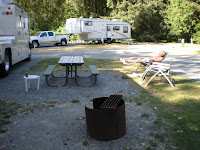 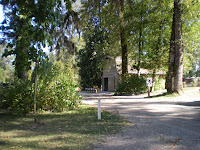