It was another early start to the day as we were going to the National World War II Museum. We had had many people recommend it as worth seeing so we thought we should take it in...didn’t need to twist Steve’s arm!!
The museum http://www.nationalww2museum.org/ is located in the Warehouse District of New Orleans and we figured there would be parking but as we neared the address we got somewhat concerned...hmmm...we are in a downtown location...will we really be able to find a parking spot for the truck? But we found a parking lot right behind the museum that was actually empty...$15 for the day...but there was also one just across the street behind the theatre so Steve walked across to it to take a look. Shouldn’t be a problem getting the truck in and it was only $6 for the day. That’s better. 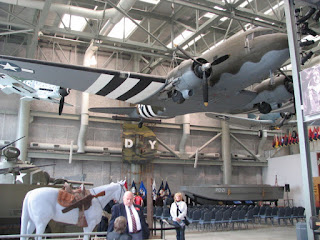 It was about 9:45 when we bought our combo tickets....good for both the museum and the 4D movie...just in time for the 10:00 showing. So we walked across the street and got in line for the movie. After sitting through an 8 minute introduction...narrated by Tom Hanks...we entered the theatre. Very comfy sometimes vibrating seats...the 4D part is feeling and hearing the movie. So you actually felt as if you were riding in the bomber planes and were part of the bombings. At one point in the movie the nose of a B17 bomber dropped down from the ceiling mating up with the rest of the bomber formation on screen and later on during a kamikaze attack on a ship a gun rose from the floor to mate up with the rest of the ship on screen with all guns blazing away at the planes. Very cool! One scene had snow...and there were soapy flakes falling us...all very cool and well done!
After the 45 minute movie, we went over to start the tour of the museum. It was done in two parts...starting with the Europe battle (Germany) and then continuing with the South Pacific battle (Japan). Although pictures taken with flash were not allowed, Steve managed to get a few pictures. As in most museums, it involved a lot of reading but it was really very well done. What I particularly thought interesting were the displays of personal memorabilia from the soldiers, airmen and sailors themselves. Lots of stories included which really made it interesting and personal. There was a display of a US soldiers helmet with a 4” dent and a sword and pistol from a Japanese soldier. Apparently the US soldier surprised the Japanese soldier who then took a swing at him with his sword hitting him on the helmet and he in turn shot him dead. He kept the sword and pistol as souvenirs. 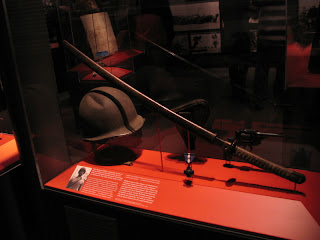 Here are a few more pictures of the exhibit...they are a little dark due to no flash... 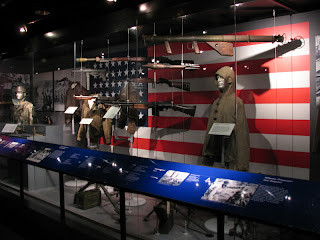 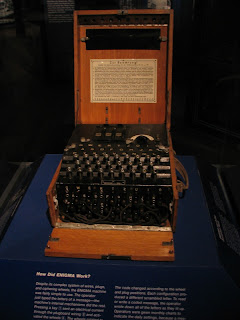 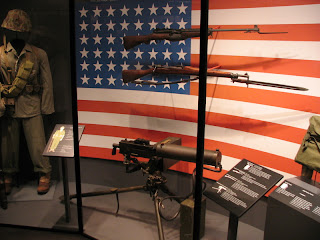 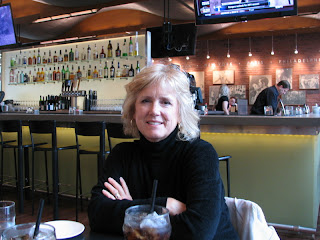 It was after 2:00 by the time we had gone through the main displays and decided to grab some lunch. We went into the coffee shop in the museum hoping to get a sandwich but they were all sold out...there had been some school tours in that day. But there was a full service restaurant across the street in the building where we had seen the movie. I must say we probably had the worst meal of all...”Po-Boy” sandwiches are quite famous in New Orleans so both Steve and I ordered one...Steve had the shrimp and spicy sausage while I had pork. Oh man...mine wasn’t too bad...just quite spicy but Steve’s was awful....tasting quite fishy. I always find it frustrating when you spend good money on something that is really ba
d. Especially when you decide to try something different...keeping in with the flavour of the area you are visiting. Oh well...chalk that one up to experience....yuck!
We just had one more exhibit to go through at the museum...it was a travelling exhibit there for a limited time...I can’t remember the exact name but it was about the experiences of American Jews that served. After that we continued wandering around seeing the extra displays through the building. 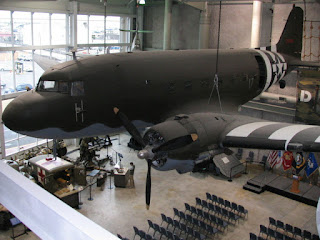 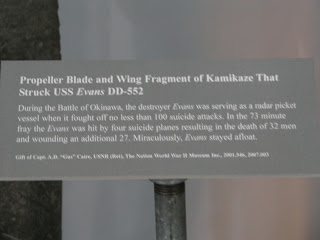 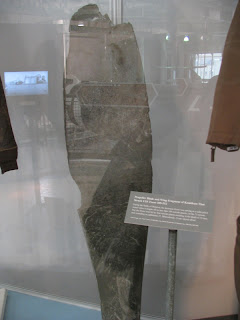 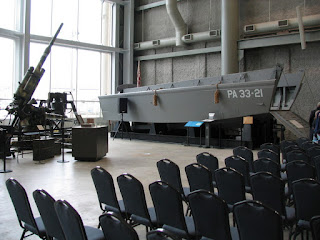 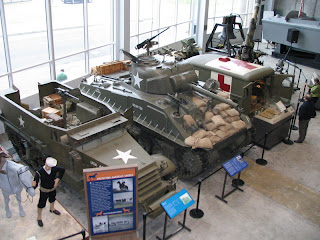 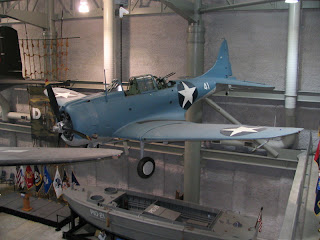 It was after 4:30 by the time we had finished and as we walked out to the truck, rain drops were starting. Well, it wasn’t long before we had a major downpour along with wind. Not a nice drive home at all.....in rush hour traffic! We had wanted to stop to fuel up with diesel on our way home in preparation for leaving tomorrow but there was no way we going to stand out in that weather! It was after 5:30 by the time we got home.
That had been another long day....time to relax in front of the fireplace while the wind rattled the trailer. Hopefully the storm would pass by morning before we had to pack up.
That evening there was a program (Build it Bigger) on the Science Discovery channel about the rebuilding of New Orleans after Hurricane Katrina. It was very interesting...and very timely. They are building a 2-1/2 mile long storm surge barrier that can handle waves up to 26’.  The piles that hold the barrier are as long as a football field and are driven into the ground at a 57 degree angle! There are new homes being built in the poorest section that was hit the hardest that can withstand 200 mph winds.
Posted by Dianne and Steve