We woke to bright blue sky this morning...a little chilly but no wind...yet, anyway! After a shower and a quick breakfast, we were packing up...and on the road shortly after 8:00. 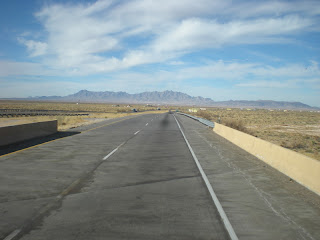 We continued on Interstate 10 towards the Arizona border...a beautiful day for travelling! We had an uneventful drive west stopping for short breaks a few times along the way. Such diverse countryside...it changes frequently from flat to hills but we were now heading into some mountains...we noticed areas where the incline didn’t appear to be steep but the truck had to gear down so we were obviously reaching higher elevations...eventually crossing the continental divide The wind had also started up...sure enough, it was after 11:00, the time it was predicted to start. 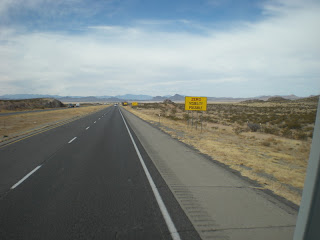 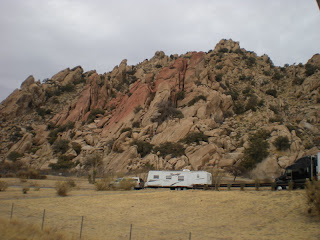 We arrived at Tombstone Territories RV Park at about 1:00. It is 10 miles northwest of Tombstone and actually considered to be in a community called Huachuca City...but it is really 10 miles east of there in a wide-open flat valley but the elevation is 4000 feet. The forecast was for strong winds with rain and snow overnight and tomorrow....snow??!!!


We got the last site that was available for 4 nights...whew! But it only has 30amp power...oh well...I guess I won’t be able to use my hairdryer...and with the weather forecast, I don’t think we will be requiring the air-conditioner. The regular rate is $33.74/night plus electricity @$.13/kwh...interesting, the first time we have to extra for electricity. With our Passport America membership, we paid $15.75 plus electricity. There is a large rec hall attached to the office with a library where they have WiFi. Just outside is the enclosed pool/spa and exercise equipment. They sure seem to have lots of activities going on. Steve asked about the ATV ride that was planned for tomorrow...it had been cancelled due to weather but had been rescheduled for Tuesday. Perfect...we weren’t leaving until Wednesday; we’ll get a chance to go for a ride! Ann, the lady in the office said that she and her husband are leading the trail ride so we got all of the details. We’re quite excited about that...we haven’t ridden the ATV’s since we were in the Ocala National Forest in Central Florida in early December! 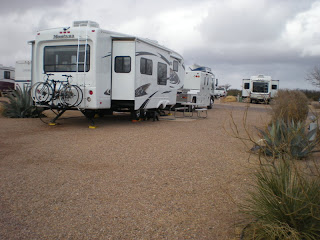 We were escorted to site C10 by a nice fellow in a golf cart. All sites in the park are big...80’x40’ and gravel with a cement pad for the picnic table. There is a little vegetation between sites...but everything is pretty brown this time of year. After getting levelled off, we unhitched from the truck and I left Steve outside to hook us up to everything while I went inside, put the sliders out and got all set up in there.

Just before 3:00, we headed into Huachuca City for diesel. Steve had found a new website (http://www.gasprices.mapquest.com/) that tracks gas/diesel prices. With the price of diesel going up so drastically, we are really going to have to watch where the best prices are. There was a Shell station on the corner where we turned off the highway and diesel there was $4.30/gallon...yikes!! But Steve had found a station in Huachuca City this morning on MapQuest where it was $3.53/gallon. Sure hope we can find it and that the prices haven’t gone up!! We backtracked to Hwy 90 and continued another few miles into town and found the Circle K station. The price had gone up to $3.60/gallon during the day but it was still a lot cheaper than $4.30! Pretty bad when you feel like you are getting a deal at $3.60/gallon!! We filled up with diesel and also got 5 gallons of gas for the quads.

Back home, we decided to battle the wind and go for a power walk around the campground. We noticed numerous ATV’s and side by sides throughout the park...obviously ATV’ing is popular here...sweet!!

We hunkered down for the rest of the evening inside in front of the fireplace watching TV. They have cable hook-up so Steve didn’t bother putting up the satellite dish in this wind. It’s supposed to be a real yucky day tomorrow but clearing up later tomorrow afternoon, so maybe he will put it up then.
Posted by Dianne and Steve